I'm starting a new theme in my blogs. I often answer questions about writing the #writingcommunity puts forward, so I thought, why not turn these into blog posts when they crop up?

A question that came up was--to paraphrase--What is psychic distance in writing? The person had heard of it but wanted an explanation. Here are my responses: 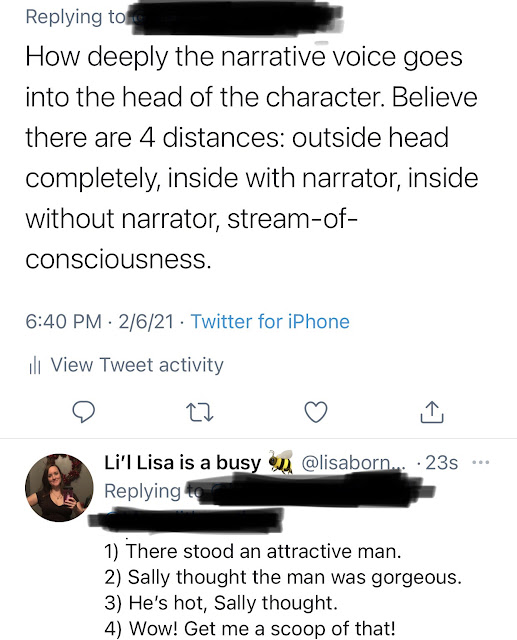 Right, so I explained the short of it with examples (admittedly not great ones but limited characters, okay?). But there is more to it than that. Psychic distance is a choice and can depend greatly on the point-of-view you adopted. It is extremely important to get down so you don't misuse it and head-hop (improperly shifting into others' heads without warning, confusing the reader). Some levels would be weird in 1st person, while others would be in 3rd. Generally speaking, using a few levels creates an interesting narrative. Let's examine them more closely and discuss when they would be useful.

Level  1--outside of the characters' heads completely. This narrative voice would be objective, like a more descriptive movie, telling us what is happening without entering characters' thoughts. I can't imagine sticking to this all the way through would be a compelling book, but it is useful in all POVs in page-turning, action scenes, ones where a nonstop pace is necessary and characters have little time to think. I imagine it is useful in sci-fi and fantasy as well, when the world-building and action take precedence.

Level 2--the narrator gets inside the heads of characters a little bit, meaning they know the thoughts but it is still distant because the narrator is someone else (a godly omniscient one) who tells us what the character thinks. This is probably the most frequently used in 3rd person. I'm not going to say impossible in 1st person, but I can't imagine it working since the narrator is the person "I" who cannot see into the minds of others. It is very useful and frequently used to give depth to 3rd person novels.

Level 3--similar to level 2, readers get into the mind of the character but this time, it's a direct line. We get to see exact thoughts, making this one useful to get the reader to bond, empathize, or connect with the character. It can be used well in 3rd person, but in 1st person, you wouldn't need "I thought," ergo the example would become more of a level 4.

Level 4--stream-of-conscious is not only being inside the character's mind without a narrator filtering it, but also following their exact thoughts and how their mind works. Readers become the character. This is useful in 1st person and doable in 3rd (some authors italicize these moments), but it can become too much if it is the only level used. I love reading stream-of-conscious, but at some point, I need some ironclad events and descriptions that are not a wild train of thought.

The key, use as many levels as your narrative voice can accommodate well, varying them up, and use them with purpose. Hope this cleared it up a bit. I think the best thing to try is to use my examples above and rewrite a sentence of yours 4 ways. You'll see which levels you like best to work with and what will work for your particular story's narrative voice and POV.