Beastly, by Alex Flinn, is an interesting modern take on "Beauty and the Beast" from the beast's perspective, although outdated now for being early 2000's trendy, verbose, and slow moving.

Not much summary is needed because it's a fairy tale retelling we are all familiar with. In this version, a wealthy and attractive teen (Kyle) is cursed into a hairy beast by a witch (Kendra) for his cruelty and overabundant arrogance. A brief encounter of kindness to a plain girl (Lindy) allows a loophole that he break the curse if someone can love him for who he is rather than what he looks like, within 2 years. Lindy's rough life, thanks to her drug-addicted father, becomes entwined with Kyle's--who now goes by Adrian to mark his disgust with his old self. A deal is made for her safety, and she and Adrian live together with the company of a housekeeper and tutor. Over time, Lindy befriends Adrian, and he hopes she will be the one to break his curse, but falling in love is never that easy. 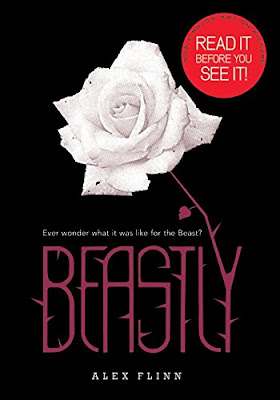 My first issue was how outdated it was, which is understandable now, but it even was for 2007. There's heavy reliance on chatrooms, no texting, and Myspace is mentioned. Now Myspace was still in use but on the way out by then, so I can let that one slip. Chatrooms have always been around but no texting? I remember texting around 2002 when we had to type out letters the old fashioned way and there was a limit on characters without being charged. I mean smartphones were released just about then and a rich kid would have every new device. It felt very like the book was 5 years behind the times, which is no biggie if you aren't trying to flaunt "trendy," but the book was gratuitously trying show off how hip it was. It felt like Mom trying to be cool which rings now like Grandma trying to pull it off (not a reference to the author's age--did not research it--but the "feel" of the way technology is embraced.)

Second, it is wordy, beyond sentence structure--300 pages long of not many events actually happening. The beginning and the end are exciting and worth it if you can get through the middle 200 pages. I struggled. I gave up twice. Finally, I forced myself to skim until I was interested again: 100 pages of nonessential material I glossed over. It detailed Adrian's daily life with tedious boredom and hardly any character change and no plot. He starts as a jerk and page 150 is minutely less so, barely noticeably. What was the purpose of those 100 pages? I couldn't figure it out, but the author does make smooth time jumps, so she should have jumped over those 100 pages of timeline. Aside form one bit cameo in the beginning, Lindy doesn't truly enter the story until halfway through the book...in a romance.

There were some good things, or I wouldn't have finished the book. I won't count off on predictability, because we know and enjoy what will happen in a fairy tale retelling, and she stays true to the original. Yet she also spins it in such a great way that appeals to YA readers at both ends of an economic ladder. It shows us themes in foils. Everything from economic disparity to personality contrast with this beauty and beast. Except beauty. She is not exceptionally pretty but average which is a good alteration--she is beautiful on the inside and once Adrian learns that, she becomes beautiful outside. The long delicate way they fall in love, over books and doing things together that their families never did for them, was a warm walk into friendship and love. Best of all, Beauty does not transform the Beast alone; he also transforms her by giving her things she was always deprived: food, shelter, safety. Basic necessities for life. They help each other become stronger human beings in different ways.

Overall, if I ignore the outdated feel, this was a slow but a worthy retelling due to the beastly POV, the inclusion of other themes, and how they changed each other. 3.5/5-stars