(Book 2 of the Meriverian Trilogy)

The Allurist's Son, by B.C. Marine, is a delightful and witty novel full of intrigue, strife, and romance. It's a perfect continuation of a carefully blended fantasy and romance series.

Healers and lifelong friends, Odelia and Kennard, found love and took over two kingdoms, uniting them with their marriage. The very "active" newlyweds must face a slew of political and familial challenges that disrupts their marital bliss but most of all, they discover their love blossoms in extreme and dangerous ways: Odelia is pregnant and no Healer has ever survived childbirth.

Aside from the looming thought of death, Odelia must strive to find equality in a formerly patriarchal sphere, discover her role as Queen, and face prejudice against her ancestry and rumors about her pregnancy. Likewise, Kennard must justly punish family, which goes against any Healer's nature, while trying to find a way to end the war. His only possible ally is the Prince of Urstille, a man Kennard is determined to hate as much as his sister Conora is determined to fall for.

Can Odelia and Kennard unite the land and save their people? More importantly, is Kennard strong enough to heal Odelia during childbirth? Or are they about to lose everything they fought so hard for? Read The Allurist's Son to find out. 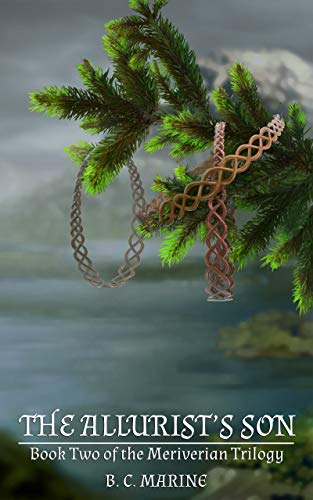 This novel was a perfect continuation of the series that shows readers the beautiful romance often overlooked in marriage. The romance is steamier, the puns and dialogue entertainingly bawdier, without getting too graphic for those who prefer cleaner romances like myself. The book had equal amounts of gravity, comedy, and romance. Marine's romance is refreshing, as it's a mix of newlywed steam and wholesome domesticity that rings so true to real life, making this fantasy feel relatable and realistic. The best part is the equality in their relationship and reign; Kennard is a king not afraid to work with his wife rather than dominate his wife as his cruel predecessors had.

The characterization expands from book one. We get way more Conora and the delicious new character Prince Calosandros of Urstille who enters the scene causing so many comedic moments. Odelia and Kennard continue to struggle and grow. As for plot, it gradually builds, as expected of every book 2 in a trilogy, but without spoiling the ending, it picks up majorly to a frenetic page-turning pace that will not let you put it down. The downside? I want book 3, and I want it now.

If you enjoy the beautiful balance of fantasy and romance, tragedy and comedy, with a dose of otherworldly politics, The Allurist's Son is a must-read.