YA Book Review: Sparky of Bunker Hill and the Cold Kid Case

YA Book Review:
Sparky of Bunker Hill
and the Cold Kid Case
Sometimes brutally realistic, sometimes lighthearted and funny, Sparky of Bunker Hill: and the Cold Case Kid is an honest portrayal of society's treatment of a street kid with a solid narration from a resilient child, with interesting characters to lighten it up and a mystery that is itching to be solved. Rosalind Barden has created a fantastic read for young adults, adults, or mature middle grade readers.
Sparky is a rough-and-tumble street kid that lives in Bunker Hill who has a tough time with birthdays. This birthday, she discovers a dead little girl on a park bench. Before she knows it, she's accused of murder, dancing with demons, and causing the Cold War (although she wasn't alive then). With her faithful companion Bobby, a strange has-been starlit and her servant, Sparky embarks on a complex quest to prove her innocence. But how much trouble can one girl get into to seek the truth and avoid the noose? 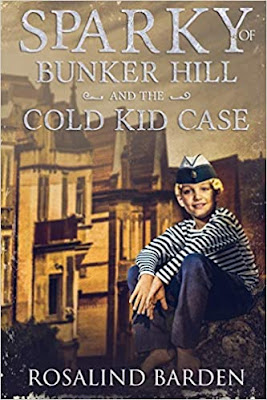 I'd rate this book as PG-13 to be safe (more YA than MG), due to the stark realism, murders, mild sexual references, and violence. However, these mature themes lend realism of the era teaching us what life might've been like on the streets for a kid. The strength of the novel is in its characterization, from the strange former star Tootsie to Sparky herself, this book gives life to these fictional characters. Sparky's unique point-of-view was well done and interesting, showing a blend of streets smarts combined with an ignorant innocence that charms the reader and makes them both sympathize with her and chuckle at her antics. All along, the reader roots for her to prove her innocence. The plot is carefully balanced between reality and disbelief which works well since it is being told by a child; in one moment the reader is ahead of Sparky due to her youth, only to have some wild, unexpected event crop up and deepen the mystery.
This is a great read, brutal, honest, and yet funny. Recommend to teen readers who love a unique mystery. Buy here
Labels: amreading bookreviews books to read depression era lit Historical Fiction indie publishers Middle grade mystery readingcommunity small press yareaders young adult books