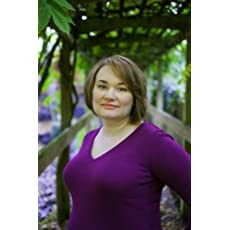 Author B. C. Marine's Ballads of Carum Sound are heavily influenced by the beautiful Pacific Northwest, where she lives with her husband and two sons. The scenic views of Puget Sound and the Cascades provide plenty of inspiration for her superpowered romantic fantasies. A Western Washington University alumna and former cosmetologist turned work-at-home mom, she writes in between family life and work for A4A Publishing. She loves knitting and spends far too much time researching for her stories.

The "Short" of it 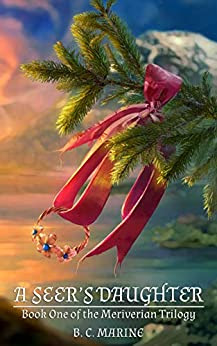 Buy Here
Two forbidden lovers share the rare gift to heal others with a kiss--but at a cost.
Enchanted healer Odelia's life has been a lie. Her father hid his visions of her future as the leader of a bloody civil war. When she uncovers the truth, she must decide whether to forsake her people or embrace a destiny that would pit her against the current heir to the throne...the man she loves.
Prince Kennard doesn't want to take after his father, as a king or a man, whereas the shape-shifting tyrant sees his son as weak. With every choice they make, the spirited prince and the inflexible king pull further apart. Kennard takes an active role at court, enlisting his friend Odelia's aid--unaware of her destined betrayal. Helping him build his royal retinue and find a bride will force her to bury her feelings and will bring his to the surface.
Amid culture clashes and threats of war, Odelia and Kennard navigate a world where power always has a price. If they choose the wrong paths, they could destroy not only their hearts but lives and nations.
And a kiss might not be strong enough to save them...
The Interview
What Inspired You To Write A Seer's Daughter?
Most of my ideas come to me in lucid dreams. About twenty years ago, I pictured this big grand emotional scene a king on a battlefield who risks everything to heal his queen of a mortal wound. It stuck with me for a long time, and more scenes developed around it and took shape into a full story. Eventually, I decided that it wasn’t going to leave my head until I wrote it down. The scene itself didn’t make it through the writing process, but aspects of it survived in various moments in both A Seer’s Daughter and The Allurist’s Son.
I read A Seer's Daughter and loved it. Patiently waiting the second book, The Allurist's Son. Can you tell us a little bit about it, particularly when I can get my hands on it?
The Allurist's Son is out on September 12th.
I can't wait! Shifting gears to the trilogy's genre, what is your preferred category and genre to write? Why?
What tale can’t be improved with a bit of whimsy, magic, or myth? And romance is so great at solidifying that whimsy, grounding it in the human experience of relationships. By its nature, romantic fantasy generally comes down to a choice between young adult or adult audiences. I’ve written some YA-appropriate short stories, but I find the themes I want to dive deeper into are better suited for adults, like marriage or parenthood.
Ah, I love fantasy romance too. What’s next for you?
The conclusion to The Meriverian Trilogy, The Healers’ Kingdom will come out next year, and after that, I have The Urstillian Duet. The two series overlap a bit, and their respective heroes are antagonists for each other. It’s fun to explore some of the same events from opposing perspectives.
Author B.C. Marine's links
Website
Twitter
Facebook
Author UBL
Labels: A Seer's Daughter amreading amwriting author feature author interview authorlife BC Marine books to read readingcommunity writingcommunity