Tales in Publishing:
Cover Reveal
It's been a long wait, but when you tell your publisher you want something that is pretty extravagant for your cover, it takes time to deliver. The same comes for the manuscript, so I apologize that my books take a year to produce. It's worth it to do things right. I'd like to show you the cover of Draca (book 2 of Celestial Spheres). 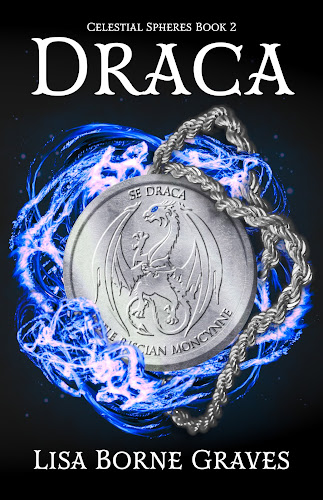 We decided to continue the circular object and flames theme, but I wanted it to be slightly different than inserting another cool stone. This book is both about Toury and Alex, of course, but more so about Alex figuring out how to fix his kingdom and the rocky relationship he has with Toury, all while finding himself. So this book is named after him in a way, since the Sapphirians are linked to the draca (an Old English word for dragon) in legends. The blue fire is to emulate his sapphire stone ancestry, and the medallion is the king's showing the torch of leadership has been handed down from father to son. Like the labradorite stone was central in book 1, Fyr, this medallion--particularly the weight it figuratively brings--is central in book 2. On the medallion itself, the dragon was intended to show what the draca look like but also to appear more crest-like since the world is heavily constructed after pre-Victorian British culture. The motto on it in old English: Se Draca sciele riscian moncynne, translating roughly to the dragon shall rule mankind.
Stay tuned for more Draca info. Be one of the first to receive Draca by looking out for my preorder announcement. Also, get the first chapter earlier than others, as well as important announcements, by signing up for my semi-annual newsletter (promise no spam). Can't wait and love reviewing books? Snag it on Booksprout right now here. Not into reviews? You can preorder Draca here.
If you need to catch up and read book one, pick up Fyr today.
Labels: book cover Celestial Spheres comingsoon cover reveal fantasy readingcommunity romance Romance novels writingcommunity YA literature ya readers YAbooks