Romance Book Review: Ask Me No Questions...I'll tell You No Lies

Romance Book Review:
Ask Me No Questions...
I'll tell You No Lies
Ask Me No Questions...I'll Tell You No Lies, by Ann Jeffries, is a heartwarming look at the interestingly glamorous side of the elite rich that shows there's always a second chance at life and love.
Loretta Hill Mason, a long-suffering wife of a womanizing and oppressive husband, is told they are getting divorced when their last of three children (two being his love children) goes off to college. Heartbroken and lost because she knows no life but with him, she ends up at Oceans Inn Resort during a hurricane. This is where Justin (Willis) McCoy finds her in a catatonic state and gets her inside. Justin is a business rejuvenator and happened to be in town trying to protect and rekindle business for the inn. That's not the only thing rekindled. A couple weeks of spending time with Loretta and this former ladies' man is in love. But with so many complex things in his life from his teenager daughter, money-hungry ex-wife, to a shady mob-like family, the Delawares, trying to force his hand into doing business, Justin has more to lose than his heart. Instead of declaring his love for Loretta, he instead attempts to fulfill her every wish and give her the future her past should have been before Mason and Loretta's family dashed her dreams and her self-esteem repeatedly. Torn apart by careers and danger, will Justin and Loretta be able to fulfill the last dream they both have and be together? Or will the Delawares strike where it would hurt Justin the most, his heart? 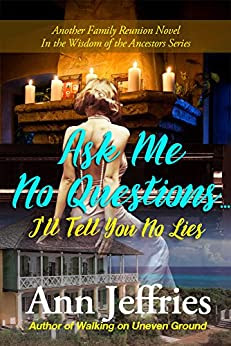 First, let me say Jeffries is amazing at creating characters you love and ones you love to hate (ugh, Mason). It quickly pulls the reader in empathizing with Loretta who has given herself over to her family and is completely self-less, so much so that the feminist in you wants to smack her upside the head. But this is a wonderfully done move on Jeffries part for Loretta to have a wondrous and realistically-pace ascension into a mighty powerful woman. Justin is middle-aged yummy, and deep down a sweet guy under his professionally closed-off demeanor. The two suited each other, and I loved how he wanted to rejuvenate Loretta, a girl he once saw in a beauty pageant.
The plot was oh-so-complex, but awesomely so. Jeffries writes a saga and carefully weaves familiar characters from other books and plants seeds for future books. This is ingenious and now I want to see how so-and-so ended up together and what will happen between Dustin right-hand man and Loretta's badass sister. The plot is weaved so well. You have chapters of Loretta's story and of Justin's story separately, and at times they weave together. Side characters are also given some attention playing key roles the main characters' lives and setting up the next thread for another book. It creates an amazing tapestry of love, danger, and soulful healing.
I recommend this book to any reader who loves a slow-burn romance with inferno highs, and who enjoy seeing people have a second chance to fulfill their dreams. I got sucked into the Family Reunion saga, and with 20+ books in the series, it will take me a while to read them all.
If interested, check out the book here.
Labels: Ann Jeffries Ask Me No Questions...I'll Tell You No Lies book reviews books to read indie books reading readingcommunity reviews romance Romance novels