I'm proud to announce that I just delivered a beautiful book that is ??? page numbers. This is the highly anticipated sequel to Fyr, aptly named Draca (book 2 of Celestial Spheres). Here's a picture of the bouncy baby, 360 (or180?) degree-view like any good parent would show. 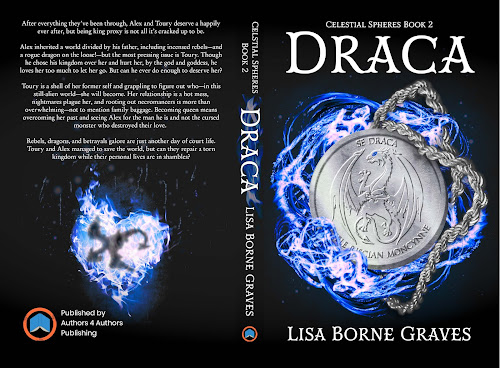 Here's a closer up view of the back cover blurb:

After everything they’ve been through, Alex and Toury deserve a happily ever after, but being king proxy is not all it’s cracked up to be.

Alex inherited a world divided by his father, including incensed rebels—and a rogue dragon on the loose!—but the most pressing issue is Toury. Though he chose his kingdom over her and hurt her, by the god and goddess, he loves her too much to let her go. But can he ever do enough to deserve her?

Toury is a shell of her former self and grappling to figure out who—in this still-alien world—she will become. Her relationship is a hot mess, nightmares plague her, and rooting out necromancers is more than overwhelming—not to mention family baggage. Becoming queen means overcoming her past and seeing Alex for the man he is and not the cursed monster who destroyed their love.

Rebels, dragons, and betrayals galore are just another day of court life. Toury and Alex managed to save the world, but can they repair a torn kingdom while their personal lives are in shambles?