Book Reflection:
Judy Blume's Fudge Series
My son is eight. He loves books. He also has autism and ADHD. Despite reading above his grade level, he isn't patient enough to read chapter books unless they have lots of pictures. (Thank you for your works Dav Pilkey and Jeff Kinney!). However, he loves MG stories, so I never stopped reading to him. This was a tradition my mother passed down to me. She read to us until my brother was probably about 15 and I was 12. She would read my brother's reading-list books to us when he was overwhelmed. When he didn't need her to anymore, neither did I because I was devouring my own reading late into the night. My mom also told allegorical stories to me to make me overcome my fears when I was little. I do the same for my son.
The past 2 years, I read him the entire Harry Potter series and then Percy Jackson and the Olympians. Next came Roald Dahl which he loved. Then we bounced around trying to find a series he'd fall in love with. Every book he likes, but after those three series, I didn't have many more chapter books. We searched. There were ones about video games, dinosaurs, and other kid-friendly action books. He liked them of course, but I longed for him to hear a book that he could not stop talking about or acting out as he had before.
If you know about autism, socialization and communication skills are a difficulty. We talk to my son, teach him through books, and he communicates back through them. If fact, he relies so much on literary conventions, like similes and metaphors, creating parallels, analogies, contrasts, etc. (and lines from movies he's watched), to describe his feelings which helps us further immerse ourselves into his world.
So I was out of books to read him when COVID-19 hit. The library closed, and he gets distracted by the device if I read from a kindle so ebooks were out. I kept a lot of my childhood books. One that survived the years was Judy Blume's Fudge-O-Mania. The title and cover sucked him in. Out of four classic kids books I had, he choose that one. 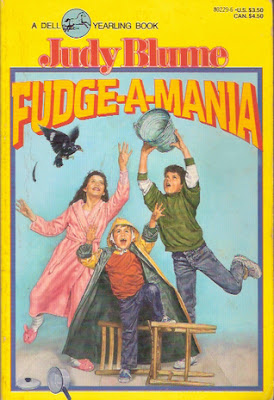 Old-School Cover
He loved it. Not only did he love it, he would stop me continuously to ask questions. As an only child with only a couple friends, he soaked up sibling relationships and friendships like a sponge. He would retell us the story with his cousin replacing the main character's friend, his friend was cast as Fudge, the little brother who you love but annoys you. He also saw how Fudge's behavior was much like his own; he could see himself in Fudge. I was surprised how much he loved it. When the libraries reopened for pickup only, we snagged the rest of the series. Now he's studying and understanding time and growing up. He realized Fudge-O-Mania was not book 1. Where was the little sister? he demanded right in the beginning of Super Fudge where the mom announces she's pregnant. Basically, my son is learning so much about life, about people.
Frequently, we are told kids want to be entertained--action, page turners, mysteries, anything to keep them reading! In reality, sometimes they like the beauty in everyday situations that crop up--mom having a baby, annoying siblings, moving, etc. They love things they can relate too--like when Peter has to pee so bad he contemplates going in the living room plant (I had to reread it twice, my son was laughing so hard)--or ones kids cannot relate too, like having a sibling (like my son). Us parents of autistic children are also told to cater learning toward the child's interests, while some other experts proclaim we should push them into the unknown just a little bit so they learn to adapt to new situations. There's a fine line between my son embracing an experience with glee and having a meltdown, so I tend to teach him down the middle of those camps of advice. I push the boundaries through books; he learns about things that in real life would make him uncomfortable (like when he hides in a friend's room when there are four other kids around and takes out every single toy to sooth himself). Seeing the interaction with the children in the books can help him see how human nature works, so when he sees those kids again--hopefully soon--he'll be able to watch them and see Peter and Fudge and transpose that story onto them and understand the sibling dynamic. Once he understands, I hope he won't have to hide and he can at least watch them, if not fully engage.
So, this is a long-winded way to thank Judy Blume, and all the writers of the 70s and 80s, for writing truly timeless pieces about children's human nature in everyday settings, while still being able to entertain. Forty years later, Judy Blume, you are helping kids deal with common issues. Not only that, you're helping one little socially disadvantage kid understand himself and others. There is beauty in simplicity and reality that maybe kids books should return to.
So tell me, what classics should I read to my son next?
Labels: autism books to read classic books Fudge-O-Mania Judy Blume kids chapter books parenthood parenting read to your kids reading readingcommunity special needs parent SuperFudge