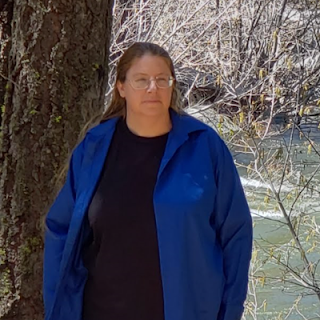 For Judy Lynn, writing stories has always been a pastime. Writing novels has always been a dream. Her favorite place to write is near the ocean in Northern California or in the middle of the woods. Nature calls to her and she loves camping, hiking, and just being outdoors at any time. She combines her love for nature and her love for writing into the same pastime. Currently, she lives in Northern California where she is the Circulation and Technical Services Manager for the library of a small college.
She's not fond of the city, but if you must live in one, being perfectly situated halfway between the mountains and the ocean is good. Judy has three boys to keep her busy, so finding time to write can be a challenge. But with the publication of  her first novel Veil of Deceit, it is all worth it. She also writes fantasy short stories: Life After the War and  To Pay a Debt.
Her Debut Novel: 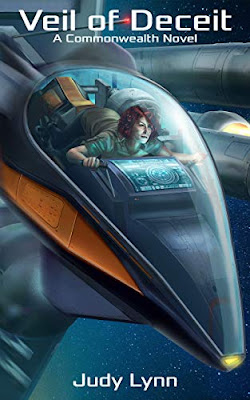 Prisoner 7578359, Commander Jayla Sans, is innocent. Framed by her own godfather and convicted of treason, she’ll spend the rest of her days on the prison spaceship Tarsha—however few she has left. During her last investigation for the military, she found a vast and insidious conspiracy, and now, various factions will kill to acquire or destroy the information in her head. Jayla must protect the truth at costs, even if that means severing ties with her loved ones. But is Jayla truly alone?
You can check it out here.
The Interview:
The age old debate--Are you a plotter or pantser? Tell us your process.

I am a complete die-hard pantser. When I wrote Veil of Deceit, I had no idea what the story was when I wrote the first line. Usually, I have a tiny piece of the story in my head when I start, but no plan on how to write it. I write on paper as it comes. When the basic story is done, I type it into my computer. At that that point, more scenes may get added, and more than once I’ve skipped over a part with the thought of “What was I thinking when I wrote that?” By the time that draft is done, it’s usually not more than a skeleton. A few more passes add detail, fix holes (because there’s always plenty when you don’t plan ahead), and solidify the POV. Then comes all the editing. Usually it’s a few more passes before I’m comfortable letting anyone read it. When I am ready, I use a critique website to get input from other writers. I have to say, that without these critique partners, none of my stories would be ready for traditional publication. I would be one of those writers who give a bad name to the self-publishing industry because I thought my first novel was ready before I even understood what a POV character was! I thank God for this website. As my critique partners work through the draft, I make many changes. They ask lots of “Why didn’t this character…?” and “What was the logic behind…?” Not to mention pointing out when emotion and descriptions were lacking, and when a new scene is needed to round out the storyline. The first rewrite is always the largest. After that, its several tweaks, then with each pass, less and less get changed, until the piece is ready to send to my publisher.

I will die on my pantser platform too. I think our methods are similar but I do less rounds and only have a couple betas. I'm naughty for that, I've been told.

Moving on, what is your preferred category and genre to write? Why?

I love both science fiction and fantasy. Asking why is like asking why I like soccer better than basketball. There’s no rhyme or reason to it. It’s just what naturally comes out of the end of my pen. One benefit to it: My science fiction is in the future, so to a point, I don’t need to research things like laws and modern medicine because it’s simple enough to make the story fit what I want. 😉

I haven't fully dabbled in sci-fi myself but love writing fantasy too. My current work is a lot of real-world research so I feel you. Future and fantasy is kind of easier. So tell us what is next for you.

I currently have two fantasy books contracted with Authors 4 Authors Publishing. They are the first two books of the Tribes of Chalent series. The first, Chieftess of Acora, is set to come out in June of 2021. The second, Guardian of Kelvia, will come soon after. The third in the same series, Healer of Simot, has gone through it’s first major rewrite, but still needs some tweaks before it’s ready to send off to them, but hopefully it won’t be long. I also have another short story that is ready to be exposed to my critique partners, and then to the publisher, with a couple more not far behind.

Wow, I thought I was busy! Sounds like you've earned yourself a seat at the table in the publishing industry. What have you learned most through your publishing experience?

There are no quick roads to success. I guess that’s something I already knew, but every new author, even though their head knows it, hopes they will be the exception. The realty can hit your heart hard, even when it’s something your head knew.