The man with a plan: 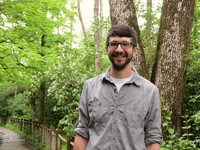 Matthew Pritt is the author of The Supes as well as many poems, songs, and microfiction stories. He currently lives in West Virginia with his wife, Lauren, and an ever-increasing number of cats. He hopes to see the Colorado Rockies win the World Series during his lifetime.

Slip Stephenson has the lamest super power of all time. His father, a world renowned Super, can turn himself invisible, but Slip has never managed to do anything more than turn himself an underwhelming shade of black.

According to the rules of the School for Underage Power Enhancement and Refinement (SUPER), Slip has to pass his final test by the end of this year or he must give up his superpowered dreams and live as a regular civilian. He spends his senior year studying with five other nearly useless would-be Supers. Together, they must work as a team and overcome their watered-down powers if they want to make it in the world of superheroes.

As this ragtag group comes together, they notice that strange things are happening in the Super world. A mysterious villain has set up base next to Slip’s school, and famous and powerful Supers are turning evil. To protect the ones they love, Slip and his team must take matters into their own hands. 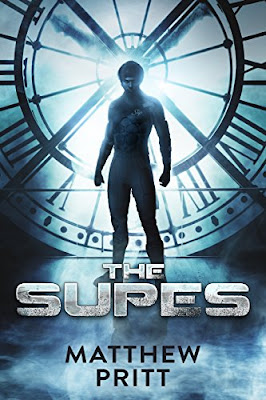 What made you become a writer?
I’ve always been a writer. I don’t think I could have ever escaped it. The first thing I ever wrote was a song about my favorite blanket when I was three years old. As I got older, I dove into songwriting, exploring topics beyond bedspreads. When I got to college, I studied music composition, and it was there that I had a change in my writing.

I was never very skilled at writing “art” music. I still wrote in a modern pop-rock style for fun, but that wasn’t acceptable at college, so I tried to do more artsy things in my music. My comp professor noticed that I kept working narrative into my music to some degree. My pieces, even if they didn’t have words, were telling stories. He pushed me to develop that even more, which led to my temporarily becoming a playwright!

After I graduated, I wrote songs for a few years, but then I got an idea for a YA superhero novel and decided to write it. I had learned a ton about structuring a narrative from my music writing, and I was able to expand on that when I started writing The Supes.

Are you a plotter or pantser? Tell us your process.

I almost never write without first doing an outline, but I don’t always adhere to those outlines very strictly. I have to have some sort of idea of what I want to accomplish within a section or else I’ll end up rambling. But I also try to be aware if something I’m writing doesn’t feel natural. I’ve noticed that when I stick too closely to my outlines, I end up with forced dialogue and plot holes.

I reset pretty often too as I’m writing. I keep outlines for 3-5 chapters in the future (with a pretty good idea of where I’m going after that), and then once I write a couple chapters, I’ll redo my outlines. That way, I have a sense of what’s coming next and what I’m working toward without getting too bogged down and feeling like I have to obey the notes I’ve left for myself.

What have you learned most through your publishing experience?

I learned so much through my publishing experience! I had no idea what all went into making a book. I had completed my draft before I looked into anything about publishing, and I thought I had the hard part out of the way already!

Every step of the way turned me into a better writer. When I was querying, I took feedback from my rejections and rewrote the first couple chapters of my book to make it more engaging. Eventually, I landed my book with a publisher, and once it got into their hands, I learned more still.

Working with editors taught me to see my book in terms of how I’m communicating. As writers, we tell stories, and just like having a conversation, our intentions in what we’re saying matter less than how they’re understood by the readers. There were sections in my first book that I thought I had nailed, and when my editors made suggestions, it was helpful to see where I wasn’t communicating clearly.

Going through editing helped me see that books can be very collaborative. When I first started writing, I shared my work with my wife, she reviewed it and we talked it over, but other than that, I didn’t get much feedback until I started querying. It helped to have outside voices make suggestions and show me where I had room for improvement. We can learn a lot from each other, and that process will almost always make the book better in the end.

How to find Matthew: