Korrigan is a page-turning blast that brings Irish mythology to life.

Aislinn is a Korrigan--girl by night, monster by day, and forced to steal years from human beings or be forced to never see daylight. Finally turning old enough to steal life and see daylight, she instantly meets falls for the adorable, wholesome Zane. But this love story is far from simple. The rest of the Korrigan are fiercely determined to control her, so "freedom" isn't all it's cracked up to be. Enter the trickster Dar Farrig and his bloodthirsty, creepy leprechauns. This trickster has conflicting and unhealthy plans for Aislinn and plays into her desire for power and autonomy, a way out of the restricting life designed for her. Will the alluring Dar Farrig urge Aislinn to go so far that she loses it all?

I always like to start of with the cons to get them out of the way. Korrigan doesn't have many, but I wasn't a fan of the protagonist, Aislinn. Some readers will love her dual personality as she is a monster yet a teenager, so she's not wholly a good person. I do like that complexity about her. What I didn't like was how she has strong moral fiber about taking life in the beginning, and yet those morals don't transfer. She's willing to hurt others for power with very little regret, refuses to admit responsibility or learn from her mistakes, and then blames the trickster for it. The Dar Farrig is partly to blame, but her lust for power seems limitlessness and unforgivable. Most likely, my main issue is that I've never been a fan of the antihero unless there is some redeemable quality. The hero can be morally gray, but I need to see he/she as superior to the villain and here I did not. However, I have a feeling Aislinn is heading for a positive turn in the later books, so I think this is a don't-judge-until-you-finish-the-series situation. 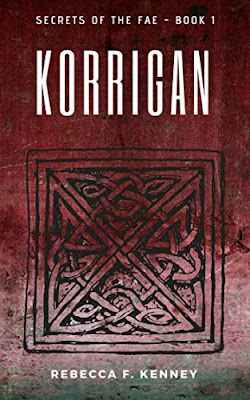 Not liking the main character might seem like a big hangup, but this book has so many positives it is worth a read. As for the other characters, the trickster's dual personality is fitting. It is great to see a hero-villain combo and still root for him, and yet know Zane is better for her. Zane is wholly good, so I almost feel bad for him falling for a girl who is monstrous in form and personality. I loved Zane's character; it was probably the best developed of the novel and although the Far Darrig is appealing, you're on team Zane because he is so sweet, honest, and accepting.

As for the plot, Korrigan starts off by sucking the reader in with an engrossing moral dilemma, but the main conflict shifts into many others, keeping readers on their toes. The plot is quick and engrossing, leaving you wanting more. The mythology is key. The fantastical is tastefully and uniquely weaved into the real world with a sinister darkness that celtic myths are prone to. A lover of mythology, I was drawn in by the premise and that is what makes the book fantastic. The myths don't quite line up with what I remember about Irish mythology, but I truly love re-imaginings or re-inventions of myths. To master old texts and reinvent them is a great talent. The dual point-of-view with Zane craftily balances normal teen life among monster myths, making the book interesting and relatable to teens.

Overall, this integration of Irish myth to real teenage life was unique, engrossing, and page-turning. I hope to continue the series to see Aislinn grow into a character that I can love.