Anthology Review Time: From the Stories of Old

From the Stories of Old

I'm a sucker for fairy tale retellings, so I bought this anthology hoping for a fresh take on old stories and was not disappointed. It wasn't quite what I expected with a couple gruesome stories and a few bittersweet endings, but these were still enjoyable and balanced well with the happily ever after tales. They are in fact truly the stories of the old, with hints of Grimm's gruesome and harsh realities, bittersweet lessons, and heartwarming tales of friends or lovers overcoming the odds to defeat evil. There were hints of cultural criticism wrapped up in future worlds where mankind's destruction or devolution propels the plot. There was love, loss, friendship, family struggles--all your timeless themes--imbued throughout, creating an enriching experience for the reader. 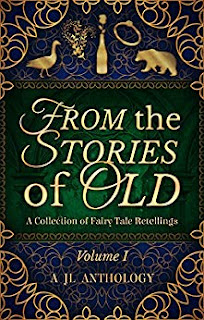 It has a bit of everything with recognizable tales such as The Little Mermaid, Sleeping Beauty, Beauty and the Beast, Cinderella, Mulan, Snow White, and Rumpelstiltskin--but of the originals or earlier versions--not Disney--to less widely read tales about Silkie or Krampus creatures, clever fables such as The Peasant's Wise Daughter, and other tales that I didn't quickly recognize, adding diversity from non-European cultures. These more obscure ones I found refreshing, but the truth is none of them are straight up retellings but stories that hold strength on their own. They are still told in the style of fairy tales, but the authors manage to slip in more characterization that the old stories could provide. Due to the genre, this appeals to teens and any adult who thoroughly enjoys fairy tales.

I enjoyed them all, but I don't want to explain any of the stories in detail and spoil them. The fun is in figuring out which tale it is based off of, then the enjoyment in seeing how it plays out in comparison to the former versions. Just know that you're getting new spins on old tales that are refreshing, current, and of multiple genres in world like or unlike our own, past, present, or future, and some are culturally inspired. If this sounds like your cup of tea you can purchase the anthology here.