YA Book Review: Fate and Fortune


I won Fate and Fortune, by Robin Daniels, at a book launch for a different author and was pleased with my bounty. It's an adorable contemporary romance with dynamic characters, realistic dialogue, and a touch of magic.

After Paige is dumped by her boyfriend of two years, she retreats from life until her brother and her best friend, Amy, force her to go to a county fair where she is pressured into seeing a psychic. To make matters worse, Paige runs into her ex and her friend Kennedy tries to make him jealous.  Kennedy tells everyone her brother, Bryce, is dating Paige. Meanwhile, Bryce, a lifelong friend who has loved Paige since he was six, also sees this psychic. After that night, Bryce is visited by a genie named Genie who will grant him wishes of her choosing, while Paige is given a magical message in a bottle that keeps disappearing and reappearing. Both these magical forces push the two into a fake relationship that might just become real if fate and magic can make it so. 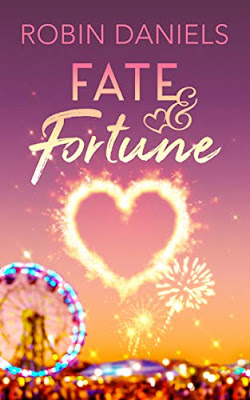 I loved the plot and I loved how things seemed magical, but their tight-knit group of friends acted weird at times showing they were involved. The only drawback was we didn't get the explanation of how it was pulled off by everyone or whether there really was some magic. The good news is, there is a sequel that tells us just that (I'll be reviewing that in the future). The events are complex but that doesn't detract from the novel; the POV is only Paige and Bryce, so it's easy to follow. I can imagine the second book will be very interesting.

Another great attribute is the dialogue and characterization. They go hand in hand. They are a bunch of funny teens who are always teasing siblings and making fun of each other for a laugh. I teach college freshman, so know first-hand that these characters ring true. It's the kind of banter I hear daily. This helped character development. Bryce was serious and sweet, while Paige was your everyday girl who was wholesome and clever so any girl can relate. They were normal teens--not stereotypes or caricatures.

In all, an adorable read for any teen or even adults who like to reminisce in the days gone by and first loves. Available for purchase here.