Although Flight had a great premise and interesting characters, it did not take flight due to one fatal flaw: the "hero." This is not a book for any female who believes in gender equality. Warning, Spoilers!

Allie decides a summer working at her father's hotel is exactly what she needs before she goes to college. With her entire life mapped out for her by her parents, she's feeling a tad rebellious. After breaking up with her boyfriend who can't seem to grasp it is over, Allie swears off guys which doesn't last when she feels a deep attraction to the arrogant and mysterious Levi. Soon she finds herself immersed in a supernatural world that makes her feel truly alive, but being with Levi might just ruin her life or even get her killed.

Overall, it is worth the read for some audiences, but I will not be continuing the series due to some issues such as characterization of the hero, disjointed scenes and plots, and negative messages to females. 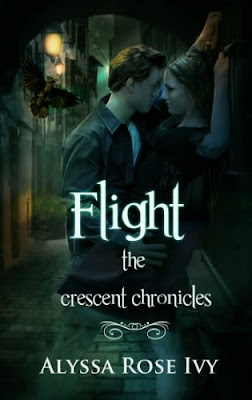 There were some plot issues. There are a lot of scenes in the book that are just characters talking that to do not tie in well to the central plot. This confused me. It felt contrived. Like her friend has a one-night-stand to lose her virginity and leaves, only so Allie would suddenly be alone. Her mother comes down for one day (because we all fly two hours and then leave) just to tell her she suddenly had a boyfriend who was moving in--so Allie would have no home to return to. It felt like random things to simply have the character be alone. Some things were never explained. Now, I've never been to New Orleans. I've heard the drinking age is 18 if a PARENT is with you. The fact Allie is drinking everywhere she goes at that age and no one questions or cards her seemed weird. Perhaps laws are slack in the city. In that case, as an 18-year-old from up north, she would be worried about it or marvel over this new freedom. There were many excuses the author could've made to explain it, but it was ignored.

This leads me to negative messages. I'm not going to bash the underage drinking; this is a New Adult novel. What I will bash is the girls' behavior around strange men. They are too trusting, allow strangers to buy and handle their drinks, walk away from their drinks, etc. I completely thought date rape was going to be a plot-point and thankful it wasn't. Girls! Watch your drinks at bars, please!

Some readers do love a domineering hero, so this book is for those readers only, not feminists. On the surface, Levi is attractive and has a devil-may-care quality. His witty remarks seem like a sexy flirtation until it keeps occurring after they're together and you just want Allie to punch him in the face. Underneath the surface, his actions prove he is arrogant, spoiled, and selfish. He is controlling and refuses to tell Allie anything, hiding things, and lies to her. Then when things are going well--even though she needs to leave town soon--he completely ruins Allie's life, stealing away all her options and putting a target on her head. She is stuck with him and in New Orleans forever. She doesn't accept his behavior, but you get the vibe she'll forgive him in the next book, since she loves the city and is attracted to him still. The message I'm getting is controlling, domineering men who strip you of your rights, autonomy, and your future are dreamy, as long as they love you.

Now, there are positives if you can get passed all of this. The premise is kind of cool and the supernatural being Levi is was creative. If the ending had been different, I would have less qualms with this book. Perhaps he redeems himself and changes throughout the series and I'm judging too quickly? I did like the rest of the characters including Allie who struggles with a mapped out life that rubs against her real needs; she is strong deep down, but it never rises to the surface because she is young and unsure. It all makes sense that she would go from controlling parents to a controlling boyfriend, but I wanted better for her. Also, the sexuality was tantalizing, not graphic, and well done.

If you prefer the domineering and controlling type of hero in your romance and don't consider yourself a feminist, you will probably enjoy Flight. It just wasn't for me but might be for you.
Labels: book reviews bookstoread flight new adult books New Adult literature paranormal romance readingcommunity writingcommunity