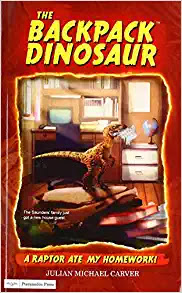 It's the first day of fourth-grade for twins Andy and Anna. Andy is a shy boy obsessed with dinosaurs and Anna is an adventurous girl willing to take risks. One day when they step off the school bus, Anna suggests taking a shortcut through a dark alley to get home.
As they navigate through the abandoned alley, they find a mysterious large egg tucked under a bush. They take it home and try to hatch it, careful not to tell their parents who are strict about pets. After building a makeshift nest in the attic, the egg hatches into a friendly baby velociraptor, whom they later name Tennyson, due to his infatuation with destroying tennis balls.
Now they must convince their parents to keep the little dinosaur, while overcoming bad grades and the school bully.
Buy Here 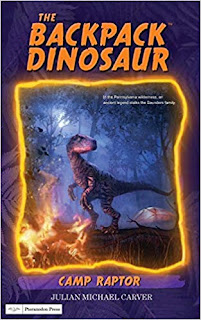 When the Saunders go camping in the Pennsylvanian wilderness, Mr. Saunders tells the kids a scary story about a legendary creature named Fatfoot, who lives in the forest nearby. At first, the children don't believe the strange tale, until things begin to go bump in the night. It's up to Andy, Anna, and everyone's favorite raptor, Tennyson, to investigate the legend themselves. 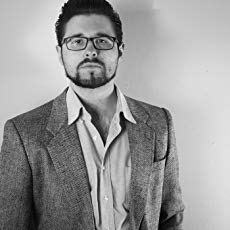 Julian Michael Carver (born Joey Kelly) is a novelist specializing in the lost world sub genre of science fiction.
Carver grew up loving dinosaurs, and aims to bring them back into the literature spotlight.

In 2013, Carver graduated from the Art Institute of Pittsburgh, with a bachelor's degree in Visual Effects and Motion Graphics. Since college graduation, Carver has worked full time in the world of commercial advertising.

He uses his skills in filmmaking, motion graphics, and animation to market and develop his works of literature. Currently, he is writing and developing a children's chapter book series, The Backpack Dinosaur, and plans to release the series through his publishing imprint Pteranodon Press.

The Man with A Plan
I asked Carver what was next for him, and he responded with, "My next steps are to continue writing The Backpack Dinosaur stores, giving kids a safe and fun form of chapter books. I have plans for at least ten stories in The Backpack Dinosaur. Additionally, I have one novel Triassic, currently under consideration from a major publisher as well as a short story that I've submitted for an anthology. I want to keep focusing all of my fictional work towards dinosaurs or prehistoric themes, and become known as the 'dinosaur writer'."


Where it all Comes From
When asked about his inspiration for the series, Carver said, "My inspiration for the series came from my love of dinosaurs in my childhood. I love Jurassic Park and The Lost World. Additionally, the book style came from Goosebumps, The Bailey School Kids, A to Z Mysteries, and other popular children's chapter books from the 1990's. I felt as if children's chapter books never really touched on dinosaurs, so I figured I'd come up with a concept because it's something I could go on and on about."

Marketing Shmarketing
All authors want to know the magical question of what works the best for marketing. Carver shared his wisdom: "As far as marketing strategies go, the least effective is probably cold-emailing bookstores or librarians. Usually there are no replies, but sometimes you will get someone who wants to buy a copy. The best strategy for me is to create commercials and run them through YouTube as ads. I work full-time as a commercial editor, so I can write the script, animate the spot, and upload/render it like second nature. I think this gives me an edge over a lot of other writers and I want to try my best to keep that going. I am toying with the idea of also submitting the spot to a movie theater and seeing how it works running the ad on the big screen."

Wow, the "dinosaur writer" has a lot going on and an amazing marketing strategy. I'll be posting a review of book 1 after I get my son's help. He is a fan, for sure. Let's support fellow authors by sharing, following, and uplifting each other. You can find Carver through the following links: