Instinct, the sequel to Niki Cluff's Breed, and is an interesting, action-packed, continuation that leaves you wanting more. Spoilers! So please go back and read about book 1 if you have not, here

Kyle and her boyfriend Ichiro survived the meteor hitting Earth and the devastation of the end of the world as we know it. Feeling guilty about living while so many others have died, Kyle hacks into the compound's saved computers files only to find Hartman, their savior and nemesis, was tracking their families. What is strange is her family's last whereabouts were the caves and they might have survived after all; what is weirder even still is Ichiro's family aren't really dead--at least before the comet hit. Keeping this a secret from Ichiro creates a rift and they go their separate ways in search of their families. Kyle puts her life on the line escaping into the frozen wilderness on the dawn of a new ice age--with a murderer, a pregnant girl, and a crafty mechanic. Survival is slim when you have Hartman on your tail, survivors are desperate, and the temperatures are plummeting. Will Kyle ever find her family? Will she live to see Ichiro again? Will Ichiro make it back from his own quest to find his family? 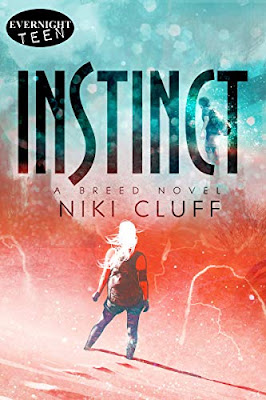 Cluff continues with her penchant of well-told action sequences and strong plots that create page turners. The reader can tell it was heavily researched and crafted to persuade us this future world is real. Everything made sense. Kyle and Ichiro had to have a fight so they could plausible split up to look for their families as well shift their relationship into a new territory. The novel also grew the characters, developing them even more. The only negative thing I have to say is that I wanted more. It was over too soon, but I guess that is the point. At the end of Instinct, it is unclear whether a third installment is coming, but I know readers most likely want there to be. It remains to be seen if Cluff will return to it after her current project involving monster folklore haunting village kids which sounds equally tantalizing too.