Being an author who was lucky enough to get published in Evernight Teen's anthology Kissed, I wanted to also read the anthology that came before ours: Summer Crush. Just like our anthology, the previous one had a stipulation centered around the setting needed to be during summer break.

Here's the breakdown of the six stories by six great authors:

Sutton Summer (by Sasha Hibbs): A grieving McKenzie gets a dose of regret after dissing Dylan who is now suddenly shed his ugly duck syndrome. Dylan exacts revenge on the girl who shattered his heart with a cross between leading her on and torturing her. What was great about this story were the character arcs. You love and hate them at times making them so relatably human. I felt at times the characters were too cruel and catty, but by the end I did end up liking them and felt they were almost fully redeemed.

Exquisite Torture (by S.D. Wasley): Ryan spends the summer at his grandmother's in the middle of no where, without any internet, fixing up her house. Soon the boredom is broken by a girl who isn't quite what she seems and he finds himself unraveling a mystery while falling in love with a girl who might not quite be alive. What was great about this one was a blend of genres. It felt paranormal, horror--in a ghost story way--but was predominantly a romance. These blends did work, not to mention a twist ending wowed me.

Forbidden (by Melissa Frost): Olivia, your typical well-behaved teen, falls for the new bad boy, Gavin. As their relationship blossoms, she learns that "bad" is a relative term and she starts breaking rules due to her rigid mother's judgmental rejection of Gavin. This one seemed like the same old plot seen often, but it was still worth reading. This one was cute, and the scenes where you see them falling in love were addictive. 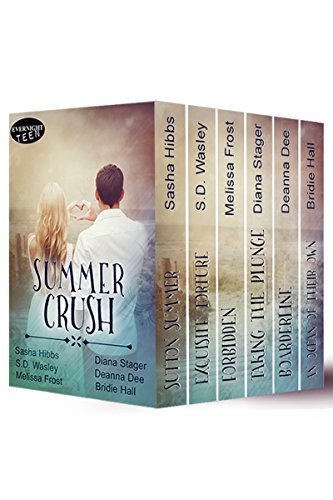 Taking the Plunge (by Diana Stager): Jessica is a teen mom raising her son all on her own while trying to finish high school. When she starts falling for Erik, a swim instructor of mom-baby swim class, and he pursues her, embracing the idea of her child rather than shying away, she is in too deep. This was a refreshingly different read showing the struggles young single mothers go through on many levels, not to mention a sweet love story of acceptance.

Boarderline Love (by Deanna Dee): Dayla is saved by Mason after almost drowning and is instantly drawn in by his hot factor, but hesitant due to his over protective attitude and shifts in moods. There's a reason Mason acts so odd: a past that he hasn't come to terms with. Enter an overprotective brother and it seems as if their romance is doomed from the start unless Dayla can get through to Mason. This one had a great plot but felt a tad melodramatic but I think only because a story with this much depth needed to be full-length. I'd like to see it as a full novel.

An Ocean of their Own (by Birdie Hall): Lola, an artist, draws a girl while on the beach which sets off a romance between them. Lola struggles with her feelings but more about how others will react to her homosexuality. Not only is this a great love story, but a coming out tale that avoids the common cliched melodrama. It really is an internal struggle and how one needs to accept herself to truly be in love. I liked this story and wished there were more diverse tales like this one in Summer Crush.


Overall, Summer crush was adorable with a nice mix of different tales. It could use a little more diversity as there was only one LGBTQ tale which seemed an afterthought being at the end all alone, but one could argue the single mom story is a bit diverse in comparison of the other stories. I think the publishers realized this which might be why Kissed has eight stories, three involving LGBTQ characters. Either way, both anthologies have some great YA stories and can lead you to some new great authors, most of which have other full-length works as well.