Grammar Woes: "Dash you to Hyphen!"

"Dash you to Hyphen!"


From a Twitter post a while back, a lot of authors were confused about dashes and hyphens and when to use them. I found that interesting since I can't remember when it was taught to me or if I organically figured it out. I'm a avid reader with a couple English degrees under my belt, so hard to figure out the when and where it entered my brain. I found this to be a finer point of grammar that most teachers probably wouldn't get to. So let's get to it, easy and quick. 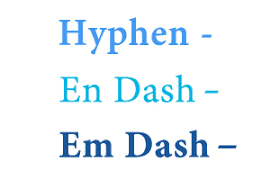 Em Dash: The em dash looks like this—which happens to be the length of the letter M, hence its name. It can be used in place of some commas or parentheses. I suggest only using them where a comma won't work: too many elements, things are confusing, or it is an aside that could go in parentheses.


She was sure—almost positive—that he liked her back, but he was shy, and she wasn’t sure if he was over his ex.

Okay, not the best sentence off the top of my head, but it illustrates the use of the Em dash as a parenthetical. If we replaced them with commas, this would be a confusing, comma-happy sentence that the writer might need to revise to avoid them or simply slap in some em dashes to keep the tone. Parentheses could be used, yes, but that kind of downplays the idea enclosed and a lot of publishers don't favor them.

En Dash: The en dash is often confused with the em. I only really use it in dates and page numbers. It is shorter than em dash and longer than the hyphen, precisely the length of the letter N. It actually has a pretty forward definition: through.

I would assume you'd rarely use this one in writing fiction, so put your efforts into differentiating the other two.

Hyphen: Not sure how poor hyphen gets thrown into this mess with such a different name, but it looks like a short dash. It's used to create compounds or combining two words to create adjectives. I love making my own compound adjectives. 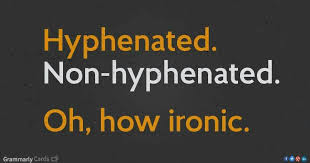 You should see her I'm-going-to-murder-you glare firsthand.

Or more common ones:

The twelve-year-old kid was moody.

Note, it is the smallest and there is no extra spacing around them (also, you might see first-hand in places which is the British usage). The hardest part is figuring out whether or not it is a combined compound or if it is a hyphenated one. And there are a ton of hyphen rules, some strictly enforced and some pretty lax. Honestly, looking it up is the easiest thing to do if you're not sure. I might just revisit it as it's own post one day.