Despite not being a gamer or a fan of Alice in Wonderland (I'm weird), Niki Cluff still sucks me in and delights me with an intricate world full of surprises, action, and romance.

In Head Case, Allyson--gamer and hacker extraordinaire--is left in a coma after a terrible car accident. Able to hear sense everything going on around her, she discovers the doctors are forcing her coma for an experimental "treatment" that would give coma patients a virtual chance to live a full life. At first, the VR world seems great, but Ally misses her family, socialization, and real life. She hacks into the VR system and uses astral planing to communicate with the living in hopes to be woken up. A big no-no it seems, so she is thrown into another world where a mad queen rules, a boy with rabbit ears steals her heart, and another whom is half cat befriends her. The problem is the mad queen Aishwarya has her heart set on the bunny-boy Harrison as well. Soon Ally and her friends are racing to escape the mad queen and are fighting for their lives both virtually and in reality. 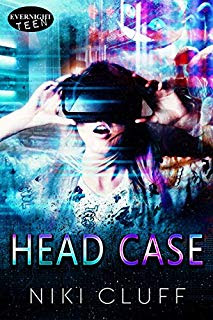 This book is definitely for teen and adult readers who are into technology. Some of the references were lost on me when it came to gaming, but Cluff does make and effort to slip in some old school titles us adults who don't play anymore would recognize. The world building is phenomenal. From describing the sensations of being in a coma without being able to see anything, to a Sims world, to a fantastical place inspired by Alice in Wonderland, Cluff shows a penchant for world building. I felt completely immersed in the game as if the imagery was projected right in front of me. The plot is refreshing and not predictable. The beginning sucks the reader in, then admittedly there is a lull before action resumes, but I felt it was necessary because the fantasy VR world and characters are so intricately detailed that a lot of the novel's strengths would be lost if the book was merely plot-centered.