Right, so my fears were well-grounded when it comes to Victoria Aveyard's War Storm. I did not like this book which unfortunately colors my view of the entire series. In all, I'm left with a blah, how-is-this-so-popular? feeling.

The plot of this book continues right after King's Cage where Cal--no surprise here--chooses the crown over Mare. She's brokenhearted and bitter but must work with Cal to defeat Maven and his allies. They struggle with their feelings not able to choose each other over their causes but unable to stay away from each other. There are battles and politics that increase until a final showdown.

If that seems like a short synopsis for a 650+ page book, there's a reason for that and no I'm not avoiding it for spoilers. The book it utterly slow, repetitive, and there is a ton of political filler that is dull. The positives? The battle scenes, the world Aveyard creates has magnificent landscapes and wonderful precision. I just wish there was less fluff between the battles. And speaking of the plot, the ending is terrible. It is anticlimactic and Cal and Mare end up where they always were: on the precipice of a decision that might eventually be made. If you're looking for a HEA or a HFN ending or even a sad ending or any real ending at all, this isn't it. It leaves the reader turning the page and thinking "That's it?" 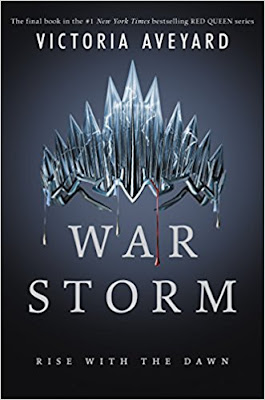 Aveyard again tries to toy with more points-of-view: Mare, Iris, Maven, Evangeline, and Cal. Again, they all sound like a version of Mare, Maven's fragmented mind not convincing, Iris annoying, Evangeline repetitive, and Cal a simpleton. I had wanted so bad to see Cal's side of things only to be let down that he is stupid. He doesn't notice anything around him or understand courtly politics that he grew up in. I was utterly disappointed in his character. From the outside, he seemed to know things and struggle, but inside she made him empty-headed, the struggle from ignorance not from moral fiber. The biggest flaw of this splintered narrative was the characters like Iris revealing the plan to move against others, so when others are surprised I saw repetition, not dramatic irony. I think if the novel stripped out all narrative except for Mare's we'd have a fantastic fast-paced book with lots of surprises.

Characterization rings false. Lots of plots are left incomplete--like the main romance and the fate of Norta. And the book leaves the reader pretty unsatisfied. I don't regret buying or reading the series, as it was entertaining enough, but I won't suggest it to others.