So I was about to give up on this series, but they were purchased for my birthday. I was definitely going to see it through now. In short, I'm still torn. This book is not nearly as good as the first one but by far better than the second. I'm happy I read it, but it does have drawbacks. Spoiler alert! See previous two posts here: book 1 or book 2.

The plot of this third installment of the series, King's Cage, sees Victoria Aveyard's storyline continue where it left off: Mare is a prisoner in the palace under Maven's rule. She is forced by the tedium to relive her mistakes and to suffer. Meanwhile, Cal and the Red Guard are recruiting in hopes to overthrow Maven and rescue Mare. At the same time, Maven is using lies and politics to convince new bloods and reds to his side, tearing the kingdom in two. Maven has two wars to fight, while the Guard finds it almost impossible to save Mare or win this war. Things aren't as they seem, though, and assistance comes from unusual places, alliances on both sides are surprising, and it culminates into a huge battle that seems to be the end for one of the sides. 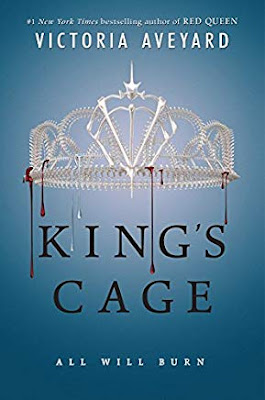 Unfortunately, that kind of is it, which leads to the first issue I had with the book. It was 500 pages of slow pacing, and there wasn't a whole lot of action going on. Hundreds of pages were of Mare being depressed and bored in her room. I was happy to see it, for I like her now. Seeing her suffer after all her self-serving attitude and using people repeatedly tipped the scales. She is still selfish but at least realizes her mistakes. And yet, she still doesn't learn from them. The plot itself repeats book 1: she's stuck in the palace, pines for Cal, wants revenge, and even in the end she depends on Cal to make the right decision and predictably he doesn't. History repeats itself. We're pretty much at the end of book 1 again. The war with Maven still ongoing.

On top of plot repetition, the author uses different points-of-view (POV). I get why, because to just have months of Mare doing nothing would get really old, but it felt like a cop out and forced. We're in Cameron's head only so we can see what is going on with Cal and the Red Guard. I would've loved to be in Cal's head to see how torn he is in every decision he must make, particularly the one in the end. We also get to see inside Evangeline's head. Odd choice too, seemingly done to show us a subplot that might be more important later, but not needed in this book. The largest issue with these POV's were they weren't unique. They were facets of Mare. I often forgot whose head I was in within the chapter because they sound exactly like Mare--Cameron as the bitter angry Mare of book 2, and Evangeline was like Mare from book 1. Evangeline's thoughts are way too kind to align with her outward actions. Irony is not created but a superficiality that does not make me like her. The attempt to humanize her after her treatment of others was overreaching.

Speaking of humanizing, what went well for this book was Aveyard's humanizing of Maven and even Mare who now thinks of others. I think some readers may hate Cal after this book, but I love his struggle and I don't love Mare enough to feel awful for her. It was a frustratingly great ending. The new characters that appear were interesting and well-developed, and more layers are added to this amazing world Aveyard created. The plot twists that weren't predictable, and the huge battle at the end, were well told. Seeing all the new bloods powers was cool, as well as the behind-the-scenes politics, and explanation of where this land really is. The best thing about this book was seeing another side of both Maven and Cal.

I really feel though that this should've been the end of the series. I honestly can't see much but more repetition in book 4 until we finally get an ending of restoring the kingdom and Maven's downfall. After reading book 2 and 3, I feel this should've been a trilogy. I'm hoping though, that by the end, I will end up loving the series as a whole but just wishing it was shorter and less repetitive.

If interested in purchasing, the book can be found here.