Warning! Spoiler alerts for book 1, Red Queen, are unavoidable so do not read on if you wish to start with the first book. Divert your eyes and click this link instead!

Glass Sword, by Victoria Aveyard, is a compelling sequel to the first but leaves this reader wanting more in both positive and negative ways.

This book picks up exactly where the Red Queen ended. Cal and Mare survived the Bowl of Bones execution much to Maven's dismay. Saved by the rebels, Cal (grudgingly) and Mare (fervently) join the rebel cause. Unable to trust anyone, let alone each other, Cal and Mare cling together to maneuver through the politics of a rebel stronghold, both not fitting in. He is a silver and who they wanted to defeat; she is the Lightning Girl, a mutation of a red and dangerously more powerful than
them all. As they set out to recruit and save other New Bloods like Mare, Maven is hunting down their recruits and murdering them, demanding her to return to him. The problem is, Maven the monster begins to rub off on Mare and she grapples to not lose herself in loneliness and a sickening addictive desire for revenge. 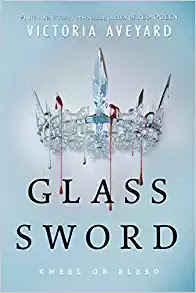 Sorry to say, but the whole premise of her becoming just like the evil Maven was too much for me, as I already viewed her as a monster before. She had wanted and had taken everything from Cal in book 1, so much so his betraying her then was only a slight sting. In this book, she betrays him to new levels speaking of him as a weapon, not a person, supposedly to save his life. You can tell from Aveyard's subtly about Cal that he loves her, despite everything, and yet there is only room for hatred in her heart for Silvers, not seeing them as human. She also sickeningly loves the idea of the fake Maven which seems misplaced as she always appeared attracted and in love with Cal deep down. Everything Cal does for her should warm her heart to him and not some fantasy of someone she never actually seemed to be in love with prior. It's like she suddenly fell in love with him when he became the monster; it leaves me in disbelief. I feel like she gets what she deserves in this book. I have no sympathy for her yet. Cal, on the other hand, I feel so bad for, as well as Kilhorn, her family, and all the New Bloods she seems to use for her own benefit. If Aveyard's goal was to create a monster, she did so most effectively.

The plot was not as exciting as the first. Again, romance is stilted and not by plot or characters' decisions, but simply a cut-to move by the author. Not sure why. I usually only see this in YA romance when it gets too risque for the readership and this is far from that. I wanted more. The plot dragged in places giving us a realistic timeline when jumps in time would be preferable. It's a lot of the same thing. 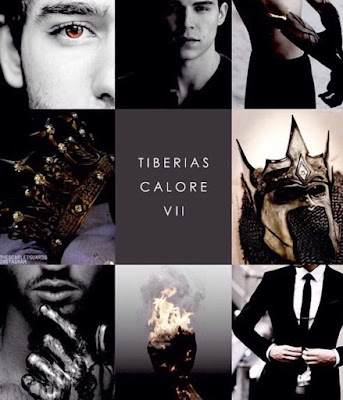 Onto the positives. The development of characters, even minor ones, was outstanding. Even though I dislike Mare, she is well rounded. I'm in love with Cal now, absolutely hate Maven--the author is playing me into her hand through her characters, making me need more. The emotion of this novel is staggering. So much sadness, hopelessness, and yet there are characters who uplift you (can't spoil that by saying who) and make you smile through the hard parts. I was fully vested in their fates. Again, the world building of cities and rebel camps make the reader feel a part of the experience. The exciting parts and the eventual progression of the plot are well told and page-turning. It leaves you satisfied and yet unsatisfied by wanting more. Aveyard has a great knack for starting the next book at the end of the former one, so you long to continue the scene. I'm honestly more addicted than I am annoyed by Mare.

I'm foreseeing that I'll love this series in the end but that a couple of the books perhaps could be condensed down together to make a trilogy instead. I also have the feeling that Mare will redeem herself in my eyes. She has started the journey, but I'm going to have to see a lot of her suffering before I'm on her side. Only reading the next book will tell me.

What Are Indie
Publishers? (Part 2)

A few blogs ago, I defined indie publishers (click here), but to sum it up, they are not the Big 5 powerhouses or their imprints, but smaller independent presses and there are loads of them. It's important to look at every avenue for publication to see your options as a writer. Indie presses are a great way to get traditionally published, often without needing an agent.

Here's a few reasons why I think they've become popular: 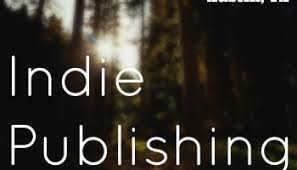 I'm sure there are many other reasons these publishers have developed. I have two presses that published my books with no need of an agent. I'm happy with both and with where I am as a writer. Who knows? Had I relentlessly kept trying for an agent, I might've gotten one, but I also might've never gotten my books out to the world. To me, at this juncture, getting published and getting a resume of published works was more important than trying to hold off and "make it big." If you've gone the agent route without luck, look to indie presses that take submissions and queries. You never know.
at February 18, 2019 No comments:
Email ThisBlogThis!Share to TwitterShare to FacebookShare to Pinterest
Labels: amquerying, amwriting, aspiring authors, aspiring writers, publishing, Writer Problems, WritersLife, writing community, WritingTip

*Warning: I'm branching off into different novels now and then to break things up. This review is on a novel intended for adult readers.


Adorably sensual and full of tension, heartbreak, and political upheavals, A Seer's Daughter, by B.C. Marine, is a refreshing must-read fantasy romance novel.

A servant girl and a defiant prince both are gifted with the same power to heal others through a kiss. Their friendship is frowned upon, a romance—forbidden. Odelia soon learns not all is as it seems in her past, the future her father predicts more daunting, and her friendship with the prince is at an impasse. Prince Kennard isn't the typical obedient son he should be, fighting his father in every aspect, particularly in marriage. Soon Kennard learns he must choose between his family and the woman he loves, while Odelia must carve the right path into the future so both she and Kennard survive. Enter in a shape-shifting tyrannical king, an overbearingly charismatic Queen, lots of meddling nobles, and fate stacking the cards against them, it's not clear if Kennard and Odelia will ever find love or whether everything will fall apart around them, including their hearts, lives, and kingdom. 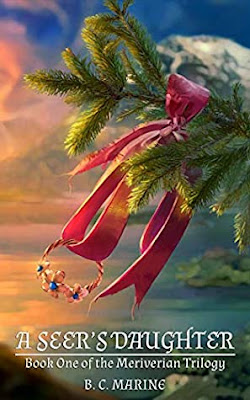 This is not your typical romance novel in that it pleasantly deters from the formulaic plot often found in other cliched romance novels. The unique build-up, the sexual tension—and sometimes frustration—between the characters makes their romantic moments all the more worthwhile. It has a strong, detailed-oriented plot surrounding court politics with action, adventure, and surprises. The novel is more centered on falling in love, characterization, and world building. I found this so much more engaging and rewarding than the majority of romance novels I've read that are simply gratuitous sex scenes strung together. This divergence from the overtired formulas and tasteful intimacy sets the book above others.

The characters, Kennard and Odelia, are well-developed and completely human—fallible, likable, and utterly realistic. It's refreshing to see a strong female lead who does the saving for once. Kennard is swoon-worthy sweet, and emotionally available without seeming weak. Aside from these two, all sub characters, down to the ones who simply say a few words, are well-developed and have personalities in their own right. As equally impressive, were the details of the world Marine creates full of nature and beauty, simplistic in natural materials and yet ornate in design. This world is fantastical, and yet so very like our own.

I'm officially in love—with Kennard, Odelia, with their world and how they shape it. Needless the say, I'm eagerly hoping for a sequel. If you're looking for something much more enriching and entertaining than the same old romance novel, A Seer's Daughter is for you.

YA Book Review: The Memory Visit


YA Book Review:
The Memory Visit


The Memory Visit, by Jenny Lynn Lambert, is a thought-provoking, fast paced page turner that leaves the reader wanting more.

The novel centers around Rain, a seventeen-year-old girl looking for answers about a memory of her brother dying. In NorCoast, our seemingly post-apocalyptic future which is low on water, one can venture to the past to relive memories as a way to escape the troubles of the present. Only when Rain tries to find answers about her brother, she picks up a thread of the past involving conspiracy, her brother's murder, and more sinister plots. Through her trips to the past, Rain learns she's a Mark, a person who can actually change a memory and therefore alter the past up to the moment she went back (her present). In multiple attempts to save her brother, and multiple threads of possible lives, Rain comes to learn that the people behind it all won't stop until she's dead and that she and Evin, no matter what thread they appear in, are linked by more than just destiny. Rain must put her heart and future on the line to save who she loves most, even though that doesn't seem clear-cut anymore. 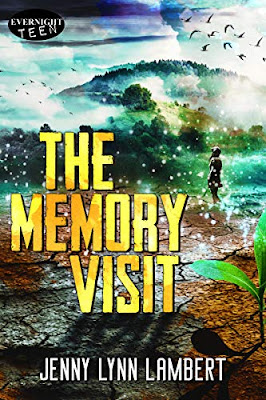 The dystopian world was well-built from the dry barren lands where the outcasts live to the the Utopian lush greens of Oasis. The corporate-run country is not too far off the mark for the US's possible future. The characters are well-developed. Rain is strong, defiant, and quick thinking--not your damsel in distress. Rio and Evin are both adorable in very different ways and the tension between Evin and Rain is palpable, letting readers see without dialogue how deeply they feel for each other. Rio played a smaller part than expected through the second half of the book, but I was glad not to see a typical love triangle.

The complex and changing timelines and pasts might be difficult for some readers if they don't pay attention to detail, but I had no issues. That being said, I have always loved time travel novels. They blow my mind with how changes in the past echo into the present and Lambert does an excellent job of showing us what can truly happen if we alter the past--both the good and terrible things that could result. The open ending of this book shows it will be part of a series, and I'm eager to see more of the same timeline jumping, past changing, and corruption fighting plot until Rain can have a happily-ever-after future.