Starstruck, by Brenda Hiatt, struck me as interesting with its stellar plot and premise and character development. But I just couldn't fully board the series' ship due to the eye-rolling-weak female protagonist that never grows from her experiences. 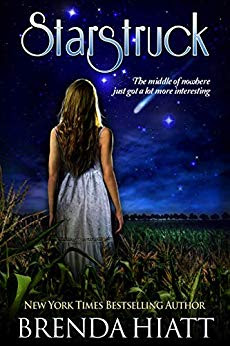 The story starts off with Marsha Truitt (known as M), the pimply, bespectacled, insecure nerd of the school lusting after the new drop-dead gorgeous, quarterback Rigel Stuart. Although Rigel seems out of her league and her nemesis/bully Trina has set her cap on him, Rigel chooses M. To both of their surprise, their connection is electric--literally. This bond they form, her sight suddenly becoming 20/20, and her acne clearing up, not mention how they accidentally zap a bully, all make M press him for answers. Those answers are way too difficult to swallow, though, since he professes to be a martian and then drops the bombshell that she's the martian princess. It takes some convincing but once she's on board, she realizes that a martian princess has a lot of enemies and a duty to her people who are on Earth and Mars. Waiting for impending doom is not M's style, so she decides to take her fate into her own hands even though it could get her and Rigel killed.

I loved the premise and the overall story, but were two cons for me. First, there is a bunch of info dropping. Even though the author took strides to divide up conversations where the characters unload the truth onto M, it was overloaded with details. Second, I despised M, the narrator. She begins out super insecure with an inferiority complex and I held on hoping for a character arc, but it wasn't enough for me. Aside from standing up to bullies a bit, she still has thoughts that make a reader roll her eyes. This insecurity may ring true for some teens, but I don't think this allows the novel to cross over to adults nor is the level of inferiority healthy for young precocious readers. To paraphrase, M constantly thinks thoughts such as how she doesn't deserve him, he can't possibly love someone like her, how she cannot live without him, believes herself pathetic, and even when he hurts her she forgives him easily. Being a fan of confident, strong heroines (or ones that start weak and self-conscious but change), this was not my cup of tea. 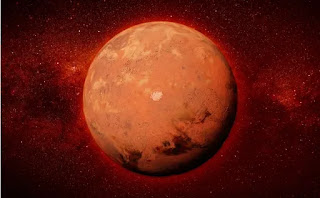 However, the book does have many redeeming qualities. The premise of martians--humans living underground on Mars enhanced by an alien species--was unique and refreshing. The sub-characters were well-developed and Rigel is gaga gorgeous and actually overall a sweet, wholesome guy (who is realistically fallible, he does mess up). Even M does have some amiable qualities. She doesn't get revenge on her bullies or wish ill will towards them, nor does she allow herself to get sucked into the popularity bandwagon.

Overall, I was content with the book, especially because it was free on Amazon, due to the premise and plot being interesting, and the characters well-developed. I just really wanted to see M's self-esteem improve by the end of the book. Let's hope book two has M grow into a more role model worthy character.

I suggest getting this anthology which I downloaded for free off Amazon so you can give this one a chance as well as six other novels I'm reviewing.