Recently, I "purchased" a free anthology of first books in series which comprised of seven novels. One of them I already owned and enjoyed reading, so I figured it would be worth my time even if I only enjoyed one of the remaining 6. This is a common practice done to try to get readers hooked into a series with a free or very low priced first novel.

It starts with Feyland: The Dark Realm, a first novel in a series written by Anthea Sharp. I was pleasantly surprised with the novel, after being unsure about the premise, and thoroughly enjoyed it. 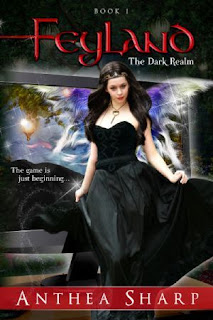 The story centers around the wealthy Jannet Carter inside a virtual reality game facing the Faerie Queene, losing much more than she bargained for. Jannet must somehow get back into the game and win it, only she needs a "champion" to do so for her. This leads her to leave everything in her life behind and move to a new town due to her father--and his prototype gaming simulator--being transferred. Here, in a rundown, crime ridden town, she searches hopelessly for the best gamer around to help her who happens to be Tam Linn, a closed-off boy with a complicated home life and poverty stricken upbringing that clashes with her exorbitantly wealthy lifestyle. Together they must fight obstacles in the real and fantasy-sim world and all before a certain date or they won't just lose themselves or their autonomy, but the real world as they know it.

The premise seemed to be out of my taste range, since it seemed to blend genres and I'm no gamer. And yet, the world building in both the Earth future and the simulated virtual reality game was astounding and well done to the point that the reader feels as if there's no game, but a real fantasy world. As a person well read in mythology, I thoroughly enjoyed this well-researched and uniquely envisioned fairy-world. The fact it was in a game made it much more plausible and less fantastical. I'm impressed with the mix of dystopian and fantasy themes, and the well-rounded characters full of rich character building issues. I absolutely love Tam.

I really have no negatives to say, except I felt the ending was done so well and things ended so perfectly that I don't want another novel. Tam and Jannet ended on such a positive note that I'd rather see two new characters in another faerie world than spoil their happy-for-now ending. I didn't look into the second book yet, but when things end so perfectly, I'm not sure what the author will do next--deepen the relationship (yes, please), break them up (no!), or insert new love interest (ugh, another love triangle)? 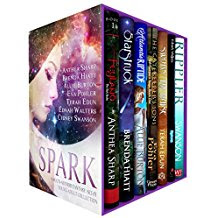 Despite my worry of where it will go, I do want to know, so it will go on my wishlist for the future. For now, I'll move on to other books. If you'd like this bargain anthology that I know has at least two great books in it (so far), here's the link below.