Recently, I purchased Insidious: An Urban Fantasy Romance (The Marked Mage Chronicles, Book 1), by Victoria Evers, due to the low Kindle price. For the price, it was a steal. Overall, an enjoyable and creative story, but it had some hitches preventing a 5/5 star status.

This story is told by Kat who's expected to be a perfect country-club teenage girl for her extremely superficial and unloving parents who expect total obedience. She's in a fatal accident but somehow survives with a quick recovery. Soon things start getting crazy and she is opened to a world of magicians, hell hounds, reapers, and an array of demons. The only person who can help her is the guy she loathes, Reese Blackburn, who ends up educating her about this world along with her ex and his father. Only these strange tattoos show up on her arm which Reese informs her are like a target for everyone in their world--good and evil--to eliminate her. As they try to figure out what her tattoo means, hide what she is from everyone, and deal with their budding attraction for each other, there is someone--her mate--out there stalking and harassing her hoping she'll fall right into his trap. 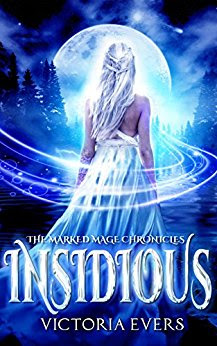 Cons--The beginning is hard to get into. The prologue scene is straight out of a movie--or so close to it I recalled the movie I had only seen once years ago--which is plagiarism. It would've been much more effective to merely have Kat watch a news report on it, since it is sort of important later. Also, there was a weird issue with word choices. People were described more by weird labels than their names as if trying to force a variation of word choices rather than depending on pronouns like "he" or a name. Last, there's a huge amount of references in this book to pop-culture things like TV, movies, etc. but the majority are from the 90's which probably goes over teens head (some I had no clue about myself either). I had to double check that the book was written recently and not back then. Just kind of awkward at times with these references and word choices.

Pros--I loved the characters. Kat had to grow on me but immediately I loved Reese and the sub characters. The mythology business with magicians, powers, demons, and reapers were the making of the book. I absolutely loved this supernatural world amidst our real one, and although I heard of the creatures mentioned before, this was done in a unique way. The mythology dealing with Hell and sinning was kind of a cool twist too. I also loved the attention to detail throughout the book in places and the pick up in pacing at the action scenes where readers want to know what happens quickly. The ending throws in lots of surprises, a couple holy crap moments, and it was refreshingly unpredictable. The plot, characters, and fantasy elements were the best parts of the book.

Overall, it was an excellent read but it needed some tweaking when it came down to the writing and the beginning of the book. I will give it 4/5 stars because I did enjoy it and it was difficult to put down; however, I don't think I'll read the second because I just didn't fall in love with it to care enough, and from the description of the next book it seems to start a love triangle with a character I cannot possibly be on board with. However, I do recommend the first book and would love to have someone change my mind and give me reasons to read the second.