Tips for YA Lit:

This 3-part blog won't be only tip giving, but also showing the struggles that arise with narrative point of view in young adult literature. Narrative style can make or break a book and turn off some readers, at least for me. Part of the narrative style consists of point of view, meaning the way in which the story is told or the lens of the storyteller. There are three commonly used points of view (I'm skipping second person "you" as it isn't very popular in novel form) defined in bold below followed by pros and cons when it comes specifically to YA storytelling. You can find other POVs here (Part 1 and Part 2).

Third person omniscient--"He/she" is used by a god-like all-knowing being who can see in every character's mind and sees all the action even when some characters aren't present.

Popular YA novel in all omniscient POV--Honestly having trouble coming up with any, after researching as well. The internet (or people on it) doesn't seem to get the difference between limited or all omniscient. This suggests it was only popular in the past or in for novels reserved for adults which makes me conclude it is not often used. Articles about the lack of this POV are out there suggesting the cause is due to it distancing the reader from the main character. This ability to connect to the main character seems paramount in YA lit, almost a necessity. 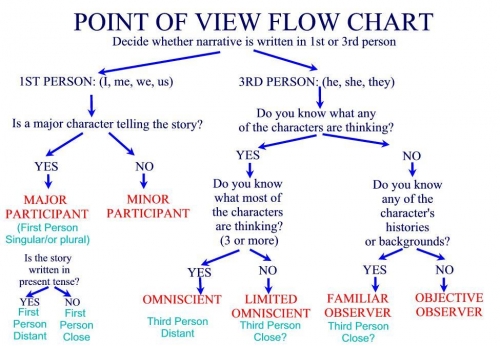 These POVs aren't set in stone. In fact, a lot of authors in out post-modern literature times mix them--Ender's Game, The Book Thief, Upon Broken Wings, and many more. This mixing of POV seems to prove equally popular as first person, so much so I had to actually research books with limited or only omniscient person (without first mixed in). What writers can get out of this is do whatever you want, experiment. If you want to take the safe route go with first person. It is the most popular and teens can relate better. But if you want to be unique try something new. As long as the reader can figure out whose head they are in throughout the book, you've done your job. This makes me want to experiment right now.