Can People Truly Have it All?

Recently in the English college class I teach, I allowed students to choose a text from a chapter on gender. The idea was they'd discuss the readings as a group, then we would give each reading equal time to talk about as a class. Only in all four classes, they wanted to talk more about two particular readings centered on a specific topic: how men and women cannot have it all. 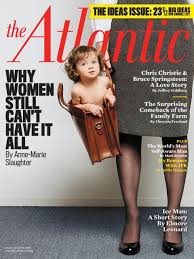 The concept of not being able to have it all is the problem that arose when the women joined the workforce and were at times forced to choose between a leg up in their career track or their family. Societal expectations dictated that women must work AND be the housewife/caregiver, so essentially having two jobs. In the more recent decades, economic struggles have forced most middle and lower class families to have both parents in a family working just to make ends meet. This means men are forced to take over some of the family rearing and home aspects, so they struggled to be the stereotypical provider AND the family man. So both men and women are stuck at an impasse that the current US economic structure cannot solve at this point: regardless of gender, people can't have it all. This is what the literature concludes (Don't shoot the messenger!). It is important to note that studies show men do not take care of the home nearly as much as women, but on average work more. When stats are measured for how much work (basically anything not for leisure) people do weekly, each gender does about the same, "clocking in" with roughly 58 hrs a week.

I found it daunting that so many young adults were realistically accepting that they would have to make sacrifices. They accepted they could not have the career they dreamed of while raising a family. They did not optimistically try to voice a solution. I think part of me admires that. Straddling the Gen X and Millennial line myself, I was raised in the 80's and 90's where we were taught to be utterly optimistic and our parents' generation grumbled about how we proclaimed we wanted to be happy, to do what we love for a living, not rich or stable as they preferred. So it was interesting as I begin to teach this generation. This instant acceptance and realistic attitude stunned me. And I wanted to give them a spark of hope. I wanted them to think of this not as the gospel truth, but a worse case scenario. 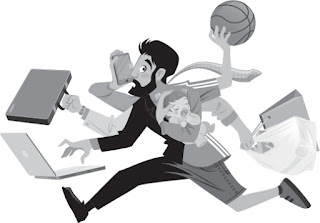 There are articles out there now proclaiming women and men can have it all and balance life completely and easily. However, reading the comments of people attacking the authors (and we know how insane some trolls get), there was a shred of truth in their sometimes angry and sometimes ignorant responses. They pointed out most these people who said they could have the career they always wanted and the family worked from home. Now in my head (and through my experience) the scene from Storks comes to mind where the little boy wants a sibling because his parents are always working despite being home. They tell him repeatedly something along the lines of 5 more minutes and we'll stop. I'm not bashing on these authors for trying to have an optimistic outlook and a desire to help others balance life, but let's be fully realistic. Anyone with kids (or pets even) who tries to work from home knows how little gets done when all the other demands occur. For five years I felt that when I was a good mother, I was a poor professor, and vice versa. It was a difficult struggle. But I learned to accept there would be a week here or there (grading) where I would be the parents in Storks, and there would be a week here or there where I'd be likened to Cameron Diaz's character in Bad Teacher (okay, maybe not that bad, but you get my point). 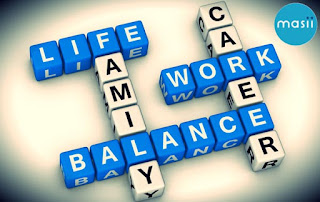 In the end, only one student out of almost eighty (or at least who cared enough and was confident enough to speak up) was dissatisfied with the prospect of not having it all. She wanted my opinion, which I usually don't give because I don't want to influence them. And she wanted more tangible solutions than the authors provided. I gave my opinion. I told them it was honestly a struggle, but I was able to move up the academic ladder (from an Adjunct Professor to a Lecturer) during the years while my child was at home full time. They were stressful years. But as soon as my son was in school, there was so much more time to get things done. Honestly, the stress and the juggling never stops, but I do feel like I have it all. How? They asked, as if they simply wanted a recipe to bake a cake, not demanding the answers to life. So I listed the ingredients to a balanced life and this turned into one of those teaching moments that is meaningful and powerful that sticks with you and them for a while. Now I share the recipe with you.

Recipe for a balanced life "cake":
1 flexible job or schedule (I only have to be somewhere 18 hours/week, the rest is at home)
1 supportive spouse
equal division of duties (from providing to household/childcare)
1 dependable babysitter or family
3 outlets for stress (something for the brain, body, and spirit)
1 family day/week
limit extracurricular activities (for self and kids) 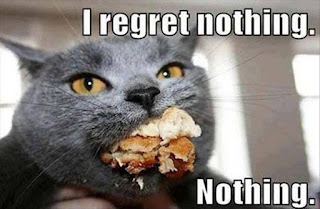 I'm sure there are more ingredients and that some of these aren't possible for people. And I'm genuinely lucky to be hyperactive and have the energy to be able to do it all. I'm lucky to have a flexible job, and a supportive family. However, the digital age allows much more online working time in a lot of jobs that could be remote or at least a hybrid of at work/online than ever before. And I did choose this career path partially for the flexibility--knowing I would not flourish in the 9-5 rat race--and that technology would allow some remote work.

I don't pretend to have all the answers, but I learned from trial and error what worked for me. More importantly, I hope I gave the next generation a less bleak outlook of their future struggles when it comes to fulfilling their life goals. If I did that for even one student, the lesson was a success. As women or men, let us have our cake and eat it too.