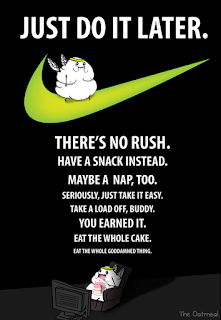 As I sit down here to write this, I'm realizing I'm performing another type of procrastination. I'm not doing what I should be doing, but instead taking on something else to occupy my time. Instead of focusing on my task, I do everything and anything possible to avoid my task. This, in a sense, is what I call hyperactive procrastination. This may just sound like your regular ole procrastination, basically avoiding or delaying a task, or if you get into psychological jargon it's really a self-control issue without the forethought of repercussions. And what I'm talking about is just that, but it's a bit more...well, hyper.

Right now, I should be sending out query letters to attempt to publish a novel. For those not in the writing industry, they're letters sent to gain representation in hopes to get published; in a sense, you sell your novel and yourself to agents. I'm not going to lie, my procrastination is out of control. I have three novels that have been completed, revised, and at least edited once. I have researched a list of thirty agents that are accepting submissions for each book's genre. I have crafted these query letters. All that is left is to personalize the letter for each agent by doing a little more research and emailing it. Yet, it has not been done. It is safe to say I had most of this completed over a year ago for the first novel.

Instead of doing what I should, I wrote two more. Not only that, I also continued the storyline of one into a second book of the series, then a third. In fact, when this blog is completed, I probably will attempt to finish the last couple chapters of book 3--without ever attempting to sell the first one. The writing comes easily and I love to write. At times I have to write or my imagination plagues me and I can't sleep. So whenever I can--even if I shouldn't--I write. 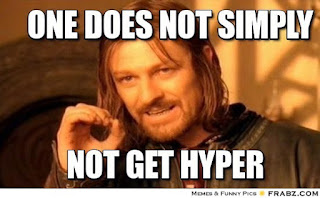 Right, so this might just sounds like ADHD, not procrastination. However, if I didn't feel like writing, I'd devour a book, detail my house, take my son onto another adventure; I will do any and everything to avoid something I dread doing. It's not really a lack of focus; I can easily focus when I want to.  This is where the hyperactivity part comes in. I never stop. I cannot sit down and simply relax or even watch TV without something else occupying my time. The only two exceptions to sitting still are if I'm reading or writing. I'm always moving, always doing something all the time. My day is consistently plotted out with things to do. Therefore, when you constantly do things on a frantic basis to avoid a particular task, I think we should call this hyperactive procrastination.

This oxymoron makes sense if you think about it. Now, how does one attempt to correct it? I wish I knew because I might have rounds of query letters out by now if I could avoid my hyperactive procrastination.
Labels: ADHD amwriting aspiring author hyperactivity imagination literary agents procrastination publishing querying WritersLife writing