The dreadful writer's block creeps upon even the best and most creative writers at some point in their careers. The blank screen just seems intimidating, the words feel forced like scraping paste out of your brain, or there's an obstacle that is even worse--lack of time. There are so many ways to overcome this and many blogs that discuss it. You need to do what works best for you, since everyone is different. Besides a lack of time to write, I've overcome every instance of writer's block easily. What I do is simply keep writing, something else of course. Be it a blog entry like this, a new short story or new premise to a novel, I write no matter how bad it is. I actually am always "working" on about 5-8 pieces. When I'm stumped somewhere, I move onto a different one. Rarely do I get through looking at all the projects and still am unable to write. Every blue moon when that occurs, I go into my own slush pile, comb through the ideas, snippets, and drivel I've written years ago (I've kept manuscripts written in high school). If there's nothing there that inspires me to write I read a book. It takes me out of my own plot for a couple days, and then I get back to work. Another great tip I've seen out there is to change your medium by handwriting if you're used to typing, or record your voice telling the story. I also bounce my ideas off friends and let them contribute. More than none the ideas don't end up in my draft but their ideas spark some of my own.

2. Perfectionist Tendencies
This is a hard one. Being a perfectionist is rough in writing because it never is perfect. You edit draft after draft, and revise it until the book is now rotted pulp on the bottom of floor of a paper factory. It feels that bad. Then after you get it professionally edited (huge internet debate where some claim a good writer needs no editor, but that's nonsense because no one is perfect), which I still do despite being an English professor, someone finds a missing comma and you want to throw yourself off a bridge. You simply have to learn to let go. It's tantamount to dropping your kid off at school for the first time. You've prepped him, prepared him, but you won't be there to ensure he is perfectly behaved or does well. You have to--in the words of Frozen's Elsa--"Let it go." I had someone criticize my blog because I  had a few typos (I posted and then proofread when able to back then), and this person said, "It's not worth doing unless you can do it perfectly." I lived that way for a long time, which is why I  never had a blog, never tried to get published, and never let anyone read my book. I would never get anywhere in life if I only acted upon things that would be perfect. I don't think anyone would because no one is perfect, especially in a subjective business such as writing where style and content are almost as equally valued as perfect grammar. 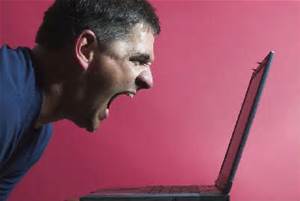 The subjectivity of the industry leads to this one. Recently on Facebook I saw a link writers were up in arms about. An author verbally attacked a reader for giving a bad review. It was your average bad review, not even scathing, just the reader admitted that she did not like the novel and it was falsely described as similar to other novels in the genre. The man went insane on her as far as accusing her to stealing the food out of his mouth and ruining his career. All my writer friends could not believe the audacity of the author. Yes, we all take bad reviews and negative criticism badly. It's like someone criticizes your child as a failure because you've put so much sweat, tears, and energy into creating the novel. However, you must learn to handle it and turn it to constructive criticism. After I initially get over the negative feedback, like swallowing cough syrup, it fades. Then I go back and read it and see what I can glean out of it to improve myself or my writing. I really hate still when someone is not constructive--"I hated it. I don't now why, but I just did"--does not help anyone. Every review I leave, whether good or bad, I spell out what I thought could use improvement and what I thought worked well. There's no real advice on how to get over this hurdle but just know they happen and you should never verbally challenge them unless the reader is absolutely wrong. I saw this once where a reader proclaimed historical inaccuracies and the author sent the reader a very nice response with a link to educate the reader that in fact the author had it right. This peaceful exchange made the reader add another star to the review. Authors and readers are all people, so treat them that way. Even though they can't see each other's face, cyberbullying is ridiculous and childish.

4. Test Groups
This one is the largest challenge for me. It is always a good idea to have about ten readers to read your book and give it feedback if you've never been published. I have seen this advice on many publishers and agents websites, one even wanting a list and their written feedback. This is problematic. If the book does not yet have a copyright you want to give it to people you trust. I know a man who had his poetry stolen, put into a contest where the woman won, and had to sue and prove his copyright to get the prize, money, and the magazine even paid and interviewed him about the incident and how it is a problem today to post writing on the internet. Fearing this kind of situation, you give it to friends and family. However, these people will rarely give you negative feedback; in fact, I'm learning that although they are very interested in helping you by reading your story, they actually don't do it. They either don't make the time, or worse, they can't get into it or dislike it but don't have the heart to tell you. I sent my novel to ten people to read. Two read it and it's been six months. One was a glowing review, one had some constructive criticism but read the roughest draft I had. I am still trying to figure this one out.

Whether it is a deadline, a full time job, childrearing, or a full social calendar, writers lack time to actually write. This is the largest problem I have and there's little advice out there about what to do except to make time. And I do. Some days it's twenty minutes of sketching out a plot or writing out an exposition scene that establishes a character; I do something--every single day. At times it is only jotting down what my daydreaming yielded on the way home from work or writing a scene in my head before bed, mentally saving it for later. No matter what, I find the time. Even right now my three year old son is looking over my shoulder telling which letters I'm pressing. To be a writer, you have to write, and ignore distractions, so you truly must make time. Sometimes my notes, plot outlines, character sketches, and random scenes don't get used until summer, where I don't work much. Then I have plenty of time to hang out with my child and to write.

No matter what, writers have obstacles. It s a hard, subjective business, that takes a lot of effort and work. Not everyone can do it. But there are ways to make things easier if it is simply letting go of notions of perfection or making the time to hone your craft. These all can be overcome with some conditioning and by making small changes in life.