"Don't Judge a Book by its Cover"

This is wise worldly advice right? Think again. It is virtually impossible to not judge, as in preconceive a person, idea, thing, or situation. This doesn't make you a bad person but merely human, fallible, and no one is perfect. Part of the human experience is making mistakes and a large part of that is judging someone or something incorrectly, but realizing you misjudged is the important part. If you ignore the fact you are wrong, that you misjudged, then you learn nothing and have a closed-minded or stubborn disposition. On a daily basis, we judge others off the way they dress, talk, walk, their actions, and more. We judge a person in a relationship off our (dis)regard for his/her significant other. OMG why won't she leave him; he's such a prick! We judge parents off of their children, which is recently a new phenomenon for me. I can't believe how awful some other parents can be and they blindly think their children are perfect angels while your child is the spawn of Satan (which yes, I would be Satan in this example). And childless people are the worst. Some believe these spawns belong on leashes and should be locked in cages. Okay, maybe not that drastic, but I've seen them give my child that look because he's too loud. You know what lady, he's only squealing with delight at the excitement of a busy store. I'm sorry that he loves life and finds pleasure in everything. You give him that look one more time and I'll set him off on a tantrum while we stand behind you in the long line. Trust me lady, he can get louder.

Judging happens everywhere and we're all guilty of it. We look at a small piece or sliver of a situation, or one moment in a person's life and draw a conclusion. It's a hasty and ill informed conclusion as we don't see the big picture. Even with close friends, we don't see behind the scenes, them at home without company. We don't see how well their significant others may treat them behind the scenes. We don't see how good of parents they are at home--we fixate on that one minute of time in which we judged: an argument, a tantrum. And we completely forget that us judging makes others self-conscious. After all, we can tell when we are being judged.

We know we are being judged when our child shouts out, "Yes! Toys! Oh so happy!" as my son did at Target. That kid is out of control, spoiled, and no wonder, look at his mother. I better get out of here before he throws a tantrum for not getting everything he wants. I'm sure something like this went through this woman's head from the look on her face and it's far from the truth. If my son is spoiled, it's by affection not toys or giving into his every whim. And I see this "out of control" behavior as a boy full of life who might have hyperactivity; those who know us well can vouch that it runs in my family. And I've been blessed so far to not have my son throw any full on tantrums in public places. Then again, I try not to take him out when he's tired. And as for judging me, the woman probably couldn't discern my age and thought me younger. It happens to me all the time. In retribution, I shoot her a dirty look. Who the hell do you think you are to look at me like that lady? Then she scampered off a bit embarrassed because I non-verbally called her out. I showed her that I was aware that she was judging me. I told her you are being judgmental and I'm onto you. So we judge and people know we do. What do we do then? Is it a hopeless case? I don't think so. Yes, this idiom "don't judge a book by its cover" is impossible, and I don it an idiotm, yet we can strive to be better people. We can try not to judge so that it happens less. 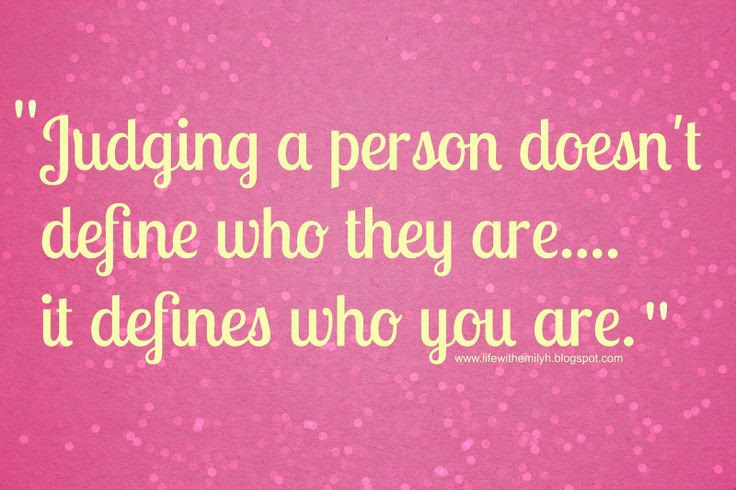 I'm trying, with great difficulty, not to judge people. I had made it a New Year's resolution. So far, I've seen that I tend to judge those I feel judge me. I judge them negatively off the fact that it appears they are wrongly judging me, which causes a vicious cycle. As for others, like a random lady who blew through the stop signal last week, I try not to get angry or judge her as a reckless, despicable human being, but invent a back story instead. After Barbara hung up the phone she jumped into the car thinking of nothing but getting to her husband as fast as possible; he was brought to the ER by paramedics only moments ago in critical condition. As silly as it sounds, this little exercise helps keep the creative part of my brain necessary for writing active. And more importantly, I've learn that we all have motivations behind our behavior, and even when we are at our worst there might just be a valid reason behind it. Try not to judge.
Labels: idioms inspiration judgement judging others judgmental life's challenges materialism nonfiction parenthood parenting positive moments positive thinking propriety real life writing