Cut out the Middleman?

You've heard about writer's block and may have experienced it; I rarely do. If there's a blank computer screen or fresh lined paper in front of me, I can just fill it up in seconds with my chicken scratch. My imagination is limitless, always on, and I'm always daydreaming. At times, if I cannot record my ideas in one way or another, I end up with sleepless nights where the characters and the scenes I'm mentally drafting plague my mind and dreams. When I'm well rested, I can even lucid dream. I invent characters, stories, and lands that I refine and develop. They even get away from me and I realize when something happens beyond my control that I'm actually asleep. In these precious moments when I begin to lose control of my thoughts, some really neat ideas come across that I would have never thought of on my own. Freud would proclaim my unconscious comes through, but I'd like to say there's something true to the muse inspiring me, almost as if it's an entity of some sort. The muse is always good to me, seeing that I can always write; it may not be the best work at times, but the point is there's an abyss of ideas always bubbling up to the surface. 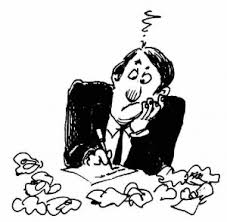 No, my problem is different. I move from one project to the next, always creating something new without doing anything with the former finished draft. Of course, I edit and revise my manuscripts to death, but I rarely attempt to sell them, which is completely stupid of me. I've been doing this as long as I can remember. My problem is I enjoy the creative process. I write because I have to and love to. Writing for the sake of writing takes up a lot of time, so to continue to write like I had in my former days I would need to try to make writing a lucrative career. In short, writing will have to be cut from my life (as it has a lot already) unless I can make money off of it. It's a terrible way to view my favorite passion, but true. After digesting the fact that I have to look at my hobby as a job, I've learned that trying to sell a book sucks. Besides the fact it is time consuming, I just hate the business side of things. To be honest, researching publishers and agents, drafting letters, sending off emails, then the waiting game, etc. is not at all interesting to me. I am not a disciplined person either, so crafting an interesting story or reading a new book beats out researching every time. I guess you would say that I don't have writer's block, but I have business block. And if I can break through it, maybe I can be successful one day. As I said in one of my prior blogs, it takes dedication and time to be successful in becoming a writer or anything in life. I now have the time, so I've got to be dedicated, set some goals, and be sure I enforce them.

First on my business list this summer was to get a feel for the industry. Or, since I did try to find an agent a few years ago, reacquaint myself with the industry and oh my how things have changed. I'd like to think in a good way. About three years ago, when I was looking to get published the only options seemed to be to self-publish or to acquire representation in the form of a literary agent via a query letter. The former, I couldn't afford and rarely yielded large profits, while the latter I find hard and exhausting to do. How can you sum up who you are and your entire novel in one short letter? It is so difficult despite the fact I studied the form, had a published colleague help me redraft mine, and changed it various times. Unfortunately, I had the most requests for portions of my novel from the very first naive draft I had made.

Now, the industry is very different. Many self-published authors can yield decent profits without a lot of overhead. Also, many publishers will talk to unsolicited authors making the idea of an agent, in some respects, redundant. Some publishers will even view your entire manuscript and not a just a query letter, so your work speaks for itself taking the hassle out of trying to sell your image in a one page letter. I kind of like this idea, since, with most publishers, the percentage of the book's retail cost seems to go to the author. The normal 15% given to the agent becomes redistributed. Basically how it works, and this is oversimplifying it, is if you get an agent, who gets 15% of the book's profit, you will get an advance, as in a chunk of money in good faith that your novel will make money. After your novel has made that advanced amount, you will then get a portion of the book's profit that is contracted, otherwise known as royalties (rough average from 1-10% of novel's price tag, but many sources conflict in these numbers), which are usually paid out twice a year to the author. However, due to reasons beyond my understanding (my uneducated guess is that it is due to an over-saturation of the market), advance price tags have dwindled over the last few years; agents can't take the chances they once could and lose money on a book that bombs. Another way the industry can pay, is by skipping the middleman and getting a publisher yourself, which usually will not get you any advance but you would get a larger portion of the royalties (15-40% roughly, and again multiple sources conflict). The publishers have less to lose due to eBook format. If the book isn't successful, then you won't be. It is my understanding you are expecting through this route to help with marketing the book. Then there is a rare flat fee rate an author may take in a one time payment. Of course, self-publishing is different--you do it all and make it all. The problem is no one knows has real figures because every book out there is a different case, contract, demand, situation, etc.

I put the question to an old college friend of mine, since she is the only person I actually directly know who is published; she seemed to agree with what a lot of people are saying--"the pendulum has swung in the other direction because now it's so easy for writers to get their stuff out there, you don't even need a publisher anymore." Her opinion is well validated as well since she got her deal by directly pitching her idea to a publisher. She does admit that agents most likely are a necessity for the big time deals, but jokingly laughs it off with, "That ain't my life." And I think she is completely right. Wouldn't it be great to just simply be published and to supplement your income off of royalty checks?  After all, a large book deal is extraordinarily rare. It is the pinnacle to one's career, not usually a starting off point. To be frank, and perhaps a bit too hypercritical, some of these big time deals are not exactly great books. True, we'd all love the big bucks, but at what price? Would we writers have to produce fluff with cookie-cutter-insert-yourself protagonists? Then again, "selling out" and awaiting an agent for a five series, six figure, international sales, and movie rights to boot deal sounds absolutely amazing. I could be very satisfied to sit at home, raise my son, and write my heart out.

So, in the end, which option is better? I'm really torn and not sure where to go from here. Do I hold out looking for an agent that I hope can yield me a larger profit? Or do I seek out a publisher and cut out the middle man? I'd love to hear opinions, so please comment, especially if you're in the industry.