I used to be an athlete. I swam, ran, and played soccer--sometimes all three in one season. I would push myself to my limit and beyond, especially with the running, and often I was injured. I felt like a warrior with battle wounds to prove it. I sprained my ankle several times, had knee issues, a bone chip in my hip, and a stress fracture in my lower back. But I gave it my all and only sat on the sidelines when forced to by the doctors. I even ran while having Mono, where my under 6 minute mile became a slow, inflated 8 minute mile.

Each injury had a badge of sorts: a brace, crutches, ace bandages, medical tape--you name it. They were tokens for all to see that I pushed myself that far for my team, that I should be proud. I would get attention from people, even the popular students who never made an effort to acknowledge my existence before my injury. I was interesting to them now. My name was in the announcements along with the win and they saw the dedication I gave to my team, school, and myself. I was never ashamed of my injuries, frustrated maybe, but deep down very proud of them.

My athletic prowess began to rapidly decline after I turned 19 and was almost nonexistent by 25. Part of the problem was an increasingly sedentary lifestyle. I like to write, read, and my job consists of a lot of grading. Therefore, a large portion of my day consists of sitting around. I rarely have time to exercise, like ever, not even 20 minutes to spare. To exercise I'd need to give up something that I thoroughly enjoy or must do. Exercising fell by the wayside to parenting, writing, grading, housework, etc. Sporadically, I get the itch to exercise or run again and so I start but life's demands soon interrupt and the routine falls apart and then pales into insignificance.

Two months ago, I was determined to lose those last 5 pounds of baby weight and started working out. Just Pilates and Yoga, but the third day I overdid it. I was sore the next day, my quads very tight, and my knees aching with every step I took. That evening when I stepped over the safety gate that keeps my son in his room, my kneecap dislocated and I fell hard to the ground bashing my head on the door frame, my body taking down the gate. I wanted to vomit when I saw my kneecap on the side of my leg, and the empty space where it had been. I had never experienced so much pain in my life. Worse than childbirth, surgery, bladder infections--it was the absolute worst pain I've ever experienced. I screamed out repeatedly regardless of my son sleeping and begged my husband to put it back in place or to call an ambulance. I knew the pain would lessen if I could just get it back in place, so beating the pain, I straightened my leg which let it slip back into place. It felt so much better, still excruciating but no longer at a level that made me wish for death rather than deal with another second of pain. 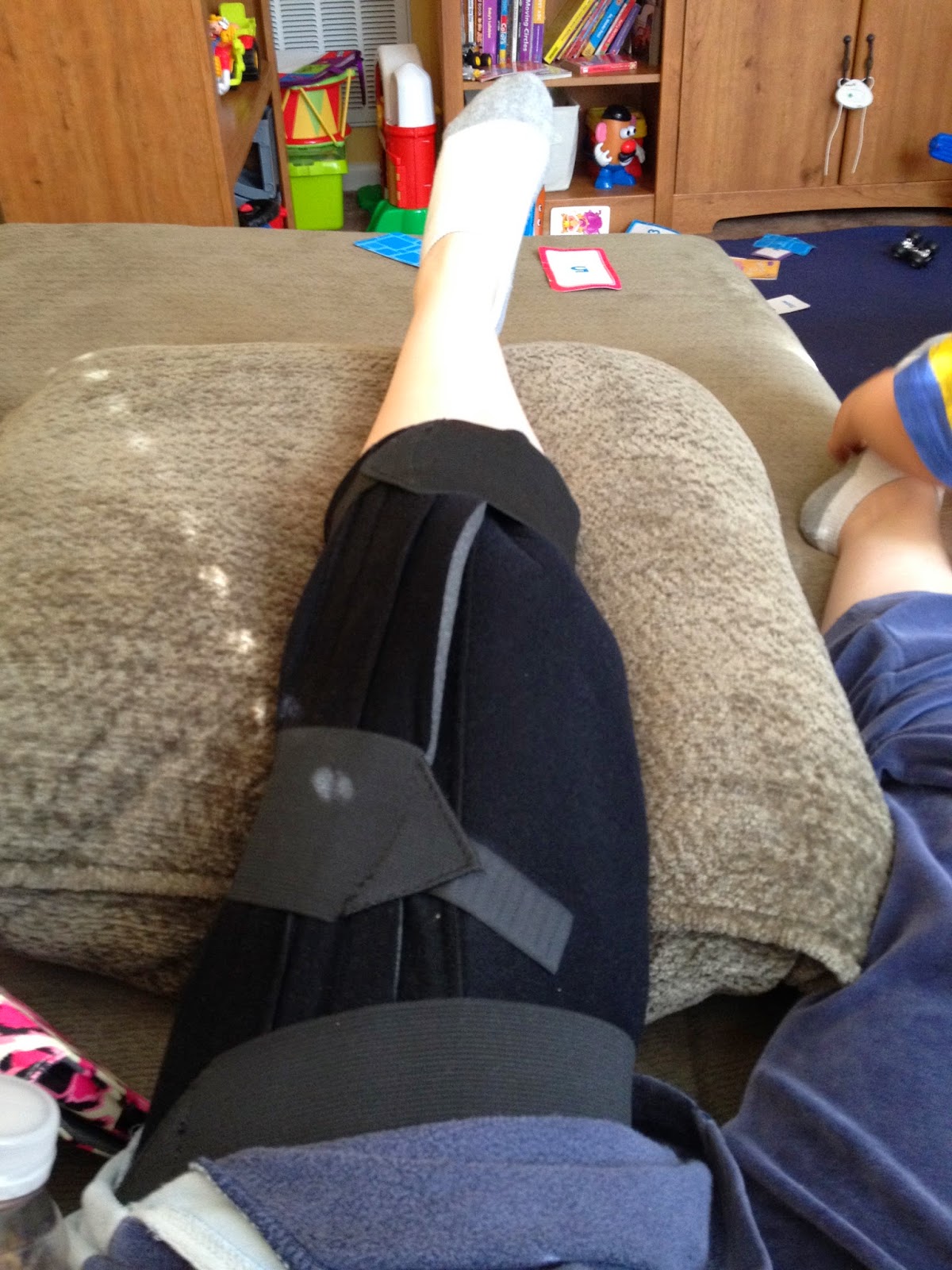 The doctor said I did a good job and that it looked good meaning no major tears or breaks. I had to wear an immobilizer for 10 days and then moved to a knee brace, and now an ace bandage. Here I am though, two months later, struggling on a daily basis to build the muscles back I lost during the immobilization. The ligaments are too tight, a touch of pain and swelling, and of course the baby weight has doubled. What started out as a good idea to get fit ended up setting me back and making me worse off. And the first time since I was a teenager, I've got my warrior badges on again.

These warrior badges (especially the hideous immobilizer) of honor no longer hold the luster or meaning they once had. As an adult, injuries have an altogether different meaning. They aren't emblems of dedication but markers of aging. Braces, wraps, and crutches are the tell-tale signs of weakness. There's no pride shown through wearing a brace. People want to know the story, they cringe for you, and inwardly they're probably happy that it never happened to them. The worse part of getting older is the rehabilitation process takes so much longer than it had when I was a spry 16 year old.

However, I still have the warrior mindset of an athlete. I am determined to get stronger and stay that way. I want to be running again by August. If it means ordering delivery instead of cooking, putting the kid to bed earlier, or just leaving a couple papers for the next day, I am going to make time to get this knee and myself back into shape and to stay that way. I never want to experience that injury or level of pain ever again.

Sometimes you just need a wake up call to remind you that you're not young and you need to take better care of yourself. That's what this warrior, a weak warrior but still a fighter, plans to do.